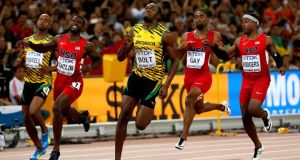 As burdens go, that was quite a big one on Usain Bolt’s shoulders in Beijing, not many competitors enter a contest knowing that it is a “Battle for the Soul of the Sport”, and should they fail, they will be entirely responsible for its demise. If, say, Bournemouth had gone to Upton Park on Saturday under that kind of pressure, it’s very hard to imagine them coming away with a 4-3 win.

And it looked a little like that weight of responsibility was taking its toll when Bolt stumbled in the semi-finals, leaving him trailing his rivals with only six-ish seconds left to catch up. But catch up he did, him being Usain Bolt, and there are quite a few of us who wouldn’t cover 100m in 9.96 seconds in a taxi, never mind on our feet after a stumble.

The Beeb’s Steve Cram was less impressed, that shaky start leaving him wondering if Bolt was fully focussed on the job of single-footedly rescuing athletics, questioning whether he had overcome a build-up that was less than perfect and if he was in what these people call the “zone”.

Some time later. Cram: “How could we EVEEEEEEER have doubted him?! And many did!” (‘Helloooooo,’ Colin Jackson might have been tempted to reply, but he generously resisted).

By the B of the Bang (copyright: Linford Christie), Cram had painted the picture, Justin Gatlin was “the baddie in this little drama”, the contest having been billed as “good versus evil”, although some might just regard Gatlin as unlucky, in light of recent revelations, having been caught twice for using banned substances. A whole bunch of them, it seems, are caught divil the once.

Having easily seen off Gatlin, then, by a whole one hundredth of a second, Bolt had done his duty. Cram emoted: “He’s saved his title! He’s saved his reputation! He may even have saved his sport!” Well, his title was retained, his reputation didn’t need saving, but his sport’s still does. Apart from that, like.

Daley Thompson chuckled. “He got his muscles to remember how he used to be,” he said, which was kind of how it was for a fella appearing at the Wyndham Championship, his 64 in the second round his best in two years. Woods. Tiger Woods. Remember him?

By yesterday, Sky’s David Livingstone was peeved. Paul Casey was on a roll in the final round, three birdies in the first six holes, but “disgracefully, once again, he is being ignored by our colleagues in America”, he sighed. True enough, anyone watching the American coverage relayed to us by Sky wouldn’t have known the English lad was even in the field. Where were their cameras? Same place as all the crowds. Following the Tiger man, even giving us close-ups of him scratching his left earlobe while Casey, possibly, was sinking a birdie putt.

Meanwhile, two men and not even a dog were following leader Jason Gore, bless him. But there is, as it proved, life in the auld dog that is Tiger just yet, the sight of him in contention, in his snazzy red jumper, on the final day, a lovely thing. (Even lovelier for those invested in telly viewing figures for the sport.). At which point he began to fade away. Never mind. As one spectator howled at him as he headed for the third tee, “good to have you back!” It was too.

Unlike Tiger, Kerry never really went away, you know, although they did have to recover from those two All-Ireland final blips against Tyrone in the last decade.

Kerry it was. Joe felt it was a fair result, apart from suggesting the referee should have given Tyrone a second penalty, given a Kerry man a black card instead of a yellow and a Tyrone man a yellow instead of a black. “Maurice Deegan did something to Tyrone that normally happens between consenting adults in private,” he said.