Liverpool through after Dortmund comeback, Liam Toland says Munster a much sterner test for Connacht, Cavanagh could retire and League of Ireland fixtures 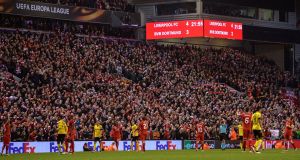 Liverpool through to Europa League semis

Liverpool are through to the semi-finals of the Europa League after they came from behind to beat Borussia Dortmund 4-3 at Anfield last night.

The German side had seemed set to cruise into the last four when they raced into a 2-0 lead and then led 3-1 with less than half an hour to play, but they meekly surrendered to allow the home side to score the three goals they needed to progress.

Joining them in the draw for the semis, which takes place at 11.30am, will be Shakhtar Donestk, Sevilla and Villarreal. That is preceded by the draw for the Champions League semis at 10.30am in Nyon, Switzerland, with Atletico Madrid, Bayern Munich, Real Madrid and Manchester City the sides left in the competition.

Munster a sterner test for Connacht

After last weekend’s heartbreaking European exit Connacht will be looking to bounce back and keep their brilliant season on track against Munster tomorrow, a fixture Liam Toland believes will present a much sterner test for Pat Lam’s men.

In his column, he writes: “For all Connacht have achieved, they have not been exposed to the onslaught that will greet them, making this their fiercest battle of the season.”

Leinster can move clear at top

With Connacht not playing tomorrow Leinster have the chance to move five points clear at the top of the Pro 12 when they take on Edinburgh at the RDS tonight, but they will have to do so without the key duo of Jamie Heaslip and Jonathan Sexton.

Meanwhile Tyrone captain Sean Cavanagh has given the biggest hint yet he could retireat the end of the inter-county season, he said: “I’d say there’s a fair chance, there’s no point in me saying any different. I suppose I’m 33 now and like anything in life the injuries start niggling you a wee bit.”