McIlroy refuses to blame new grip for late collapse, Dublin set to be without McCaffrey this summer and what to watch out for 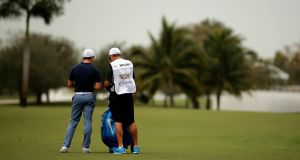 Rory McIlroy talks with his caddie J.P. Fitzgerald on the 10th hole during the first round of the World Golf Championships-Cadillac Championship at Trump National Doral Blue Monster Course. Photograph: Mike Ehrmann/Getty Images

Rory McIlroy double-bogeyed the last to finish five shots adrift off the lead after the first round of the WGC Cadillac championship - yet he refused to blame his new putting technique for his disappointing finish.

After missing the cut in the Honda Classic last week, McIlroy changed to a “crosshanded” putting method – with his left hand below the right on the grip – and vowed to stick with it regardless of the short-term outcome.

Shane Lowry also hit a round of 71 to leave the duo five shots behind joint leaders Scott Piercy and Marcus Fraser.

Meanwhile Dublin’s aim to secure back-to-back All-Ireland titles looks to have taken a hit with last year’s footballer of the year Jack McCaffrey looking set to miss at least part of the season as he may opt to work overseas during the early part of this summer’s Championship.

The UCD medical student would be a huge loss to Jim Gavin’s team, already minus fullback Rory O’Carroll who will spend the next 12 months working in New Zealand.

Last night the GAA’s Central Competitions Control Committee (CCCC) took the decision that has forced Roscommon’s league match against Down to be relocated to Longford’s Pearse Park.

The switch which has angered many fans comes after continued problems with the county’s main ground, Hyde Park - while the CCCC then ruled out Kiltoom, used as the secondary ground for county matches, due to it’ s inability to facilitate the expected crowds.

Liam Toland’s column this morning says that Ireland can emulate the improving Argentinians, but there remains a dearth of knowledge in our game which impacts at a formative level.

“In essence we can improve both injuries and skills by recognising there is a dearth of knowledge in the formative levels of our game that potentially exposes players to injury whilst paradoxically not maximising underage skills. The competitive structures are not fit for either purpose.”

Martin O’Neill has expressed some relief that Aiden McGeady is getting to play his way back to full fitness at Sheffield Wednesday. “He’s one of those players, if he doesn’t mind me saying, that needs to be sharp to be at his very best. He can take players on and he can deliver good ball and can beat players with ease and those type of things; not everybody is blessed with that.

Round two of the WGC - Cadillac Championship tees off this evening from Miami.

The weigh-in for Conor McGregor’s and Nate Diaz’s fight is also on tonight.

Wins for Wexford, Cork and Clare; Ireland to name updated squad for England trip 07:20
Dublin overcome the elements and Carlow 06:00
Tipping Point: Eddie Jones’s rhetoric is out of place in a febrile political climate 06:00
Leinster let their feet do the talking as they make it 17 wins on the trot 06:00
Dan McFarland calls out Ulster’s naivety after loss away to Ospreys 06:00