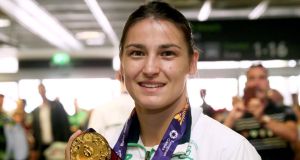 Boxer Katie Taylor when arriving back at Dublin Airport after she won gold at the 2015 European Games, held in Baku, Azerbaijan, last month. Photograph: PA.

There was decidedly bad news for Katie Taylor’s rivals in her division when, after winning her 18th consecutive title at the European Games in Baku, she declared that, as time goes by, she gets “hungrier for medals”.

Her appetite for success, then, is far from satiated, despite feasting on victories since she first took to the international stage.

She had, of course, to work harder for her latest triumph than we are accustomed to seeing, her semi-final against Azerbaijan’s Yana Alekseevna the tensest of affairs, Taylor winning through on a split decision, her relief evident when the announcement was made.

Her victory over France’s Estelle Mossely in the lightweight final was straightforward enough too, the triumph leaving Taylor as the holder of the Olympic, World, European and European Games titles all at the same time. She has now collected every major title there is to be won.

“I want to go down in the history books as the greatest female boxer of all time,” she said after her Baku success, “I think I’m on the right path.”

And that’s hard to dispute.

The Offaly woman captained the Irish senior women’s team to an unlikely bronze medal at the European Cross-country Championships in Bulgaria, combining with Fionnuala Britton, Sara Treacy and Michelle Finn to beat France by a point to a place on the podium.

For the second year running, Dwyer was the MVP in the National Cup final, this time driving Team Montenotte, Glanmire to success over Killester, top-scoring in the game with 20 points.

The driving force behind Ireland’s Six Nations victories over Italy and England, the 28-year-old lock going on to play an equally influential role in the victories over Wales and Scotland that clinched the team’s second title in three years.

The Irish captain led the team to a memorable Six Nations success, one that included only their second ever victory over world champions England. Briggs marked her 50th cap by contributing 23 of Ireland’s 73 points in the mauling of Scotland that sealed the title.

The Kildare jockey became only the third woman, after Ann Ferris in 1984 and her sister-in-law Nina Carberry in 2011, to win the Irish Grand National, riding the Sandra Hughes-trained Thunder And Roses to victory at Fairyhouse.

Leona Maguire (Golf) & Madeline Perry (Squash) Maguire, a student at Duke University in North Carolina with her twin sister Lisa, reached the top of the world amateur rankings after three tournament wins in her first season in the US, and was voted top female US collegiate golfer of the year. And last weekend she finished runner-up at the European Masters where she was up against the best of the sport’s professionals.

Fellow Ulsterwoman Perry called time on a professional squash career that began 16 years ago and saw her reach the heights of the third-ranked squash player in the world. She signed off in style, winning the Irish Open and helping Ireland win bronze at the European Championships in Denmark.