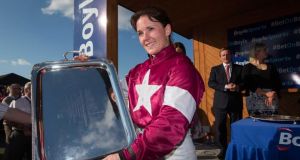 Katie Walsh after winning the Irish Grand National Steeplechase on board the 20-1 shot Thunder And Roses, trained by Sandra Hughes, at Fairyhouse, Co. Meath. Photograph: Inpho

It was back in 2010 that Katie Walsh won her first Sportswoman of the Month award after a memorable visit to Cheltenham where she had two rides – and two winners.

She was, she said at the time, on cloud nine after the experience, a location she found herself in again two years later when she came third in the English Grand National, making her the highest-placed female jockey in the history of the race. And for that, need it be said, she picked up her second award.

From cloud nine to seventh heaven, or whichever’s higher, it’s a hat-trick of awards for Walsh after that very special day at Fairyhouse last month when she became just the third woman, after Ann Ferris in 1984 and her sister-in-law Nina Carberry in 2011, to win the Irish Grand National.

She did so on board the 20-1 shot Thunder And Roses, trained by Sandra Hughes – who became only the third woman to train an Irish Grand National winner. The ultimate “Ladies Day”, then.

All eyes, of course, had been on Tony McCoy, riding in his last Irish National, and like Walsh he managed to avoid the melee at the first fence that saw six horses fall, finishing sixth in the end, but in an incident-jammed race, that saw just nine of the 28 runners finish, Walsh prevailed.

The brother, Ruby, whose useful at this game too, was one of the first to congratulate her, followed soon after by Ted. “She’s not two hands higher than a duck, she’s as fit as a flea,” said the da, as only the da could.

Walsh had never even sat on Thunder And Roses in public before the day, and after a less than impressive Cheltenham, hopes weren’t all that high for the seven-year-old. But the 30-year-old jockey expertly steered him home, making it yet another memorable day in her career.

“I’ve enjoyed some great days and been very lucky, but this is right up there,” she said. “It’s the Irish National, it’s Fairyhouse, it’s Ireland, it’s local, it’s a race I never dreamed of winning: it’s magical.”

Previous monthly winner (awards run from December 2014 to November 2015, inclusive). December: Ann Marie McGlynn (Athletics). The Offaly woman captained the Irish senior women’s team to an unlikely bronze medal at the European Cross-Country Championships in Bulgaria, combining with Fionnuala Britton, Sara Treacy and Michelle Finn to beat France by a point to a place on the podium. January: Gráinne Dwyer (Basketball). For the second year running, Dwyer was the MVP in the National Cup final, this time driving Team Montenotte, Glanmire to success over Killester, top-scoring in the game with 20 points. February: Sophie Spence (Rugby). The driving force behind Ireland’s Six Nations victories over Italy and England, the 28-year-old lock going on to play an equally influential role in the victories over Wales and Scotland that clinched the team’s second title in three years. March: Niamh Briggs (Rugby). The Irish captain led the team to a memorable Six Nations success, one that included only their second ever victory over world champions England. Briggs marked her 50th cap by contributing 23 of Ireland’s 73 points in the mauling of Scotland that sealed the title.

5 Brian Kerr: ‘The uncertainty, lack of support from the FAI, it was a dark time’