Blood clots can interfere with the respiratory centre in the brain, writes Dr Muiris Houston 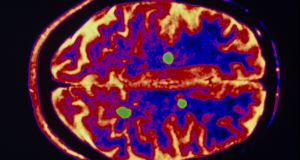 If the pressure from a blood clot on the brain cannot be relieved by a surgical procedure then the person may die.

The death of MMA (mixed martial arts) fighter Joao Carvalho from a traumatic brain injury underscores the serious dangers inherent in the sport.

We know he had emergency surgery on Monday night, which suggests he had a bleed into his brain shortly after the fight ended.

A collection of blood which forms in this way is called a haematoma. It can form in different locations inside the skull. The dura is a tough membrane that covers the entire brain and spinal cord.

Because these collections of blood gather within the confined space of the skull, as they swell they increase pressure on the brain tissue. The victim loses consciousness. As the unrelenting pressure increases, it may interfere with the respiratory centre in the brain - the part that ensures we automatically breathe.

If the pressure cannot be relieved by a surgical procedure then the person may die.

While the risks of head injury from boxing are well documented there is a relative paucity of research into the risks from MMA. Canadian researchers writing in the American Journal of Sports Medicine in 2014 found that a MMA fighter suffered a traumatic brain injury in almost one third of professional bouts.

The University of Toronto researchers analyzed seven years of Ultimate Fighting Championship (UFC) scorecards — which detail when a fight ends with a knockout or technical knockout — as well as watching videotape of bouts.

Analysis of fight videos suggested that some 90 per cent of the knockouts were a result of repetitive strikes.

“The 30 seconds before match stoppage was characterized by the losing competitor sustaining a flurry of multiple strikes to the head,” the researchers said.

Half of the knockouts occurred because of blows to the lower jaw. Some 85 per cent of knockout blows were due to a punch, with the remainder due to kicks. Worryingly the researchers found an average of 2.6 head strikes after a knockout-blows that were inflicted on unconscious fighters.

Last month consultant neurologist at Beaumont Hospital, Prof Dan Healy said he had treated three brain haemorrhages associated with MMA fights in the last three years and was concerned a serious injury could lead to a fatality.