Sonia O’Sullivan: Is MMA really sport if it enters the death zone?

Conor McGregor fight attracted me, but I did not feel comfortable when blood started flowing 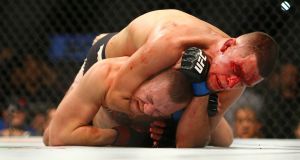 There was something essentially pure about being back at the Irish Schools Cross Country Championships last Saturday. The setting at Sligo racecourse was perfectly in tune. The bright spring sunshine. The clean crisp air. And the majestic backdrop of Benbulbin

It’s always interesting to see how the sport is evolving down through the years, where the next generation of athletes are starting from and launching their dreams for a successful future.

In many ways, cross country is running at its most natural and also at its most testing, given the often undulating terrain. It takes a tough kid to run cross country but is also helps develop quality attributes of strength and endurance that can stay with them for the rest of their lives. Young athletes are also known to attack from the very start, and on a challenging course such as Sligo, with cold air hitting the lungs, many were pushed beyond their comfort zone, leading to some distressing scenes at the end of the race as the athletes walked through the finishing funnel. There was mud, there was sweat, and, yes, there were some tears.

A few of them had given so much that they fell almost lifeless to the ground. I actually saw one schoolgirl being administered a tank of oxygen. As athletes we all want to be the best we can be, and sometimes this competitive drive can lead us to irrational behaviour that pushes our bodies beyond the limits we have ever reached before, so that the body and mind don’t always co-operate as one.

The need for that oxygen tank certainly stuck with me, especially into Sunday evening, when I was reviewing some of the other sporting events of the weekend, and found myself again and again confronted by that competitive drive, and what it sometimes does to people.

I was curious to see the Conor McGregor fight. I knew the result but as I’d only seen about eight seconds of McGregor in actual competition before, I felt a fight that extended into two rounds would help enlighten me a lot more.

Being back in Ireland the whole week before drew me into some of the hype and build-up, and I have also caught all the analysis and reviews since.

McGregor is among the fittest, leanest athletes that I have ever seen, but when he took to the octagon in Las Vegas last weekend he looked like a bloated version of what I’d seen before. He appeared to have an extra layer of himself on top of himself. It made me even more curious about the fight, and even hours after the event, and knowing the result, I was gripped to the screen.

However, it must be said I wasn’t sitting too comfortably when the blood starting splashing around the ring: what about the blood rule we see in most other sport? In UFC, they simply play on – and it’s probably not a good idea to be sitting in the front rows. I wanted to see the athleticism that McGregor is famous for, but it was hard to see the muscles and strength; instead he seemed to be weighed down by whatever extra weight was needed for this fight against Nate Diaz.

Then came the second round, and the choke-hold that ended McGregor’s fight. I could hardly believe how far this competition is allowed to go. McGregor is one of the most popular sports people around, and not just in Ireland. He’s brought UFC into conversations up and down the country, and even old men who grew up with hurling, football and athletics are joining the UFC conversation.

There was also a review of the choke-hold earlier in the evening that sent Holly Holm out of the octagon unconscious: is this just one step away from death? Sport is a game, something that we do for health, fitness or else watch for entertainment. I don’t think anyone would feel comfortable watching a sports event if one of the athletes is left dead.

Unfortunately, this has happened in the past, in the case of accidental death; however, the purpose of winning should not be to kill the opposition. We have all used phrases such as killing and annihilation when talking about sport, but not in the literal sense. Only now I fear we may be allowing this to happen in front of our eyes. What example is this for young children to aspire to? It is not something that you would like to see emulated in the playground.

Just before the McGregor fight I also got to watch a review of the GAA match between Kerry and Donegal, and that turned out to be quite a battle too. The competitive drive was clearly in full force, although it seemed as if both teams were up watching the McGregor fight in the early hours as part of their warm-up.

There was such clear disregard for where to draw the line, or in this case hold the punches. When a football game turns into a near battle field, with punches thrown and disregard for the rules, it is probably fair to say that the competition has gone beyond sport, as if entering some realm of hatred.

Then I think back to the Irish Schools Cross Country, and that oxygen tank, which of course was more a precautionary measure than a necessity. There is nothing wrong with testing the limits of our strength and endurance, no matter what the sport. And I am all for encouraging competitive sport amongst our children and continuing through the teenage years and into adulthood.

But there must also be some control, an end goal, to win the competition, or to test and push yourself beyond previous limits. When the end goal goes beyond sport and enters the death zone, then I have to question: is it really sport?