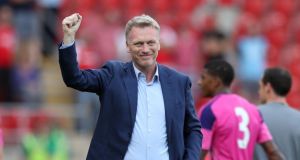 New Sunderland manager David Moyes looked to make an early connection with the club’s fans on his first day in the job.

Moyes was installed on Saturday morning, signing a four-year deal less than 24 hours after Sam Allardyce’s move to the England job was finalised, and watched the Black Cats defeat Sky Bet Championship side Rotherham 2-1 in a friendly at the New York Stadium.

He decided to leave Robbie Stockdale and Paul Bracewell in charge of team affairs, looking on from the stands instead, but posed for pictures before kick-off, and waved when invited by a travelling contingent of over 2,000 as they chanted ‘David Moyes’ red and white army’.

At the end of the game the Scot joined his new players on the pitch and raised a clenched fist towards the away end as they acknowledged him.

Moyes saw Charles N’Zogbia, the former Newcastle winger who was taken on trial by Allardyce, turn in an eye-catching display.

The 30-year-old Frenchman may have thought his hopes of winning a contract were slim after the FA came calling for Allardyce but he set up Fabio Borini for the opening goal and made it 2-1 in the closing minutes to make his case to the former Everton and Manchester United manager.

Reinforcements are certainly a requirement on Wearside, given the thin first-team squad, but Moyes is delighted to be in charge.

“I am delighted to have joined Sunderland,” Moyes said on www.safc.com prior to this afternoon’s game. “I am relishing the challenge and excited by the opportunity.

“I have taken over a big British club with a great support and I’m looking forward to working in the Premier League again.

“I look forward to continuing the good work done by Sam.”

Black Cats chairman Ellis Short was thrilled to have finally secured a man he says he has wanted to appoint on five occasions — including when Allardyce took over from Dick Advocaat last October.

While Moyes’ stock may have fallen since ill-fated spells at United and then Real Sociedad, his 11 years at Everton made him an attractive proposition for a club who hanker after the kind of stability he brought to Goodison Park.

“We are absolutely delighted to welcome David Moyes to Sunderland, who was by far and away our first choice,” the American businessman said.

“He is a man whose football pedigree speaks for itself and is someone I have long admired.

“I have spoken with him on many occasions and I have always been hugely impressed. He was my number one managerial target for the last five appointments, but his desire to honour existing contracts meant we were not able to bring him to Sunderland previously.

“To be able to finally welcome him as our manager is fantastic news for the club.

“The fact that David has committed to a four-year deal is a clear demonstration of his belief in what he can achieve here.

“It is our aim to become a better, stronger and more stable football club and with a manager of David’s calibre and experience at the helm, we have a fantastic opportunity to begin looking upwards, rather than downwards every season.”

Moyes has managed more than 800 senior games in club football and boasts a wealth of top-level experience.

The Scot began his managerial career with Preston in 1998, before moving to Goodison Park in 2002 and overseeing a largely positive tenure which ended when he succeeded Alex Ferguson in the United hotseat ahead of the 2013-14 season.

He signed a six-year contract at Old Trafford but was sacked after just 10 months, with the Red Devils seventh in the Premier League.

A fresh challenge in Spain followed, in November 2014, but he lasted only a year in that role.