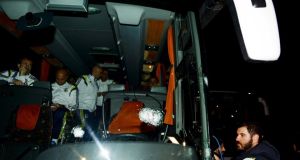 Fenerbahce officials wait in the damaged team bus which was shot at while it was being driven through to Trabzon Airport. Photo: Reuters

Turkish police have detained two people suspected of involvement in an attack on Fenerbahce’s team bus, a governor told reporters on Tuesday.

The bus driver was taken to hospital after being wounded in the incident which took place as the team were travelling to Trabzon before flying back to Istanbul. Fenerbahce were going to the airport after a 5-1 away win against Caykur Rizespor.

The two suspects, one of them 38 years old and the other 27, were detained early on Tuesday, Trabzon Governor Abdil Celil Oz said.

Oz said the attackers had fired two shots at the bus with a rifle. No players were wounded.

The Turkish Super League has been suspended for a week in the wake of the attack on Fenerbahce’s team bus.

Second-placed Fenerbahce are two points behind arch-rivals Galatasaray with eight games left this season. Their next game, at home to fourth-placed Bursaspor next Monday, will now take place at a later date.

1 Cheltenham faces criticism after racegoers suffer Covid-19 symptoms
2 Sport will be last duck in the row in return to normality after coronavirus
3 Andrew Conway diary: In search of a competitive edge
4 My favourite sporting moment: Shels finally make all the heartbreak worth it
5 Avoid the treadmill at all costs – marathon training in the 2km radius
Real news has value SUBSCRIBE
Crossword Get access to over 6,000 interactive crosswords