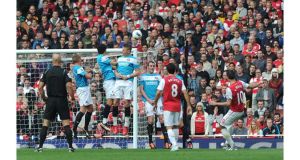 Arsenal's Robin Van Persie (right) scores his second goal and the winner against Sunderland from a free-kick in the second half of the Barclays Premier League clash at the Emirates Stadium. - (Photograph: Anthony Devlin/PA Wire)

Premier League review: Shola Ameobi came off the bench to preserve Newcastle's unbeaten start to the Premier League in an entertaining 2-2 draw with Tottenham. The striker smashed home an 86th-minute equaliser just when it looked as though Jermain Defoe had claimed all three points with his 68th-minute strike.

Rafael van der Vaart had put the visitors ahead with a 40th-minute penalty after Steven Taylor took down Emmanuel Adebyaor, but Demba Ba's fifth goal in three games dragged Newcastle level three minutes after the restart.

Taylor admitted afterwards that referee Lee Probert was right to award a penalty but said Newcastle’s determination showed as they twice fought back to claim a point.

“I think it was a penalty, I made contact and I’m disappointed with that,” Taylor said on Sky Sports 1. “But credit to the lands, we came back and it was fully deserved.

“There’s determination and a winning mentality in the squad and today that showed.”

Although they twice trailed, Newcastle ended the day ahead of Spurs, though they could have won it had Fabricio Coloccini converted a late chance.

“We knew if we got a goal it was going to be electric here and the fans got behind us and rode us on,” said Taylor. “From going a goal behind we came back and were unlucky to get a point.”

Cheick Tiote, named man of the match, said he felt Newcastle had passed an important test as they bid to keep up their excellent start to the season.

“It was a really good game, played well and we deserved the point,” he said. “It was a big test because everybody knows Tottenham is a good team and today we saw that.”

Newcastle stay fourth with a match against struggling Wigan next on the agenda.

“There’s loads of confidence,” Taylor said. “We’re playing well so bring on the next game against Wigan. We’re looking forward to it.”

The Holland striker, who used his pre-match programme notes to declare his full commitment to Arsenal, put the Gunners ahead after just 29 seconds but the home side went in 1-1 at half-time thanks to an excellent free-kick from former Gunner Sebastian Larsson.

The game appeared destined for a draw as Arsenal proceeded to squander several good second-half chances, but Van Persie saved the Londoners' blushes with a wonderful curling free-kick of his own nine minutes from time.

West Brompowered out of the relegation zone after goals from Chris Brunt and Peter Odemwingie earned a 2-0 win over Black Country rivals Wolves.

Albion's bid for a first home win of the season got off to a flying start when Brunt fired them ahead early on, and Odemwingie stepped off the bench to seal victory with 15 minutes left.

The victory lifts West Brom from the dropzone into midtable.

Allardyce angry with VAR after ‘human error’ denies another goal 08:46
Six Nations and Leinster trips to proceed; Robinson on target in West Brom win 07:25
Bernard Flynn believes Dessie Farrell will regret Dublin’s lockdown training session 07:00
Different Strokes: Glass half full for Shane Lowry after best Masters finish to date 06:00
Rhys McClenaghan: ‘It would be almost silly not to aim for gold every time’ 06:00

5 Allardyce angry with VAR after ‘human error’ denies another goal