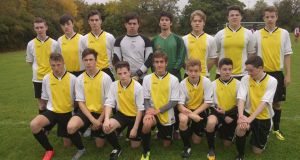 It is as you travel away from the sprawling student residences on the edges of the UCD campus and towards the River Dodder that you find yourself in the middle of a mish-mash of different educational cultures.

Along the Roebuck Road you pass the Islamic Cultural Centre of Ireland, followed closely by the Muslim National School and, just around the corner, a bit of Germany and France lie side by side. It is here, in the shadow of the Belfield university campus, that you come across Lycée Francais d’Irlande and St Kilian’s Deutsche Schule.

And it is in that shadow of a campus with so much soccer history that St Kilian’s is making a name for itself on the schools soccer map. An All-Ireland title and five Leinster championships have been delivered to this leafy area of south Dublin. The German origin of the school naturally lends itself to the idea of soccer success but, over the last five years, they have been helped along the way by a sprinkling of classic Italian goalkeeping. Surely it’s a dream combination for a penalty shootout.

The school reached the Leinster final of the John Murphy Cup in 2012, won the title in 2013 and made it to the final again last year. In all three of those successes the senior team has been led by Italian goalkeeper Alessandro Del Gener. The 18-year-old grew up in a small town outside Milan and was picked up at the early age of seven by Lega Pro Prima Divisione side Tritium.

With a reputation for producing top class young players from its academy and with links to Atalanta and Inter Milan, Del Gener began to excel. In a country that has produced goalkeepers such as Gianluigi Buffon and Dino Zoff, being recognised at all by a professional club is an impressive feat. Indeed, a former teammate of Del Gener, Roberto Ranieri, now plays for Serie A side Atalanta.

In early 2011 the family moved to Ireland and the young goalkeeper signed for local side Templeogue.

But it was in school that he found most of his soccer success. In first year he lined out for the senior team in a friendly before cementing his place in the side the following year. At the age of just 14 he was instrumental in the under-19s team reaching the Leinster final where they eventually lost to St Kevin’s.

The following year they would make amends for that defeat by beating New Ross to win the Leinster section of the John Murphy Cup. And two years later Del Gener picked up his third Leinster medal when his side were beaten by New Cross in the final.

But having come from an academy background in Italy, what does the young goalkeeper think of the standard of football in Ireland?

“I think athletically Irish players are fantastic but it’s the technique side of the game that can let them down. There are a lot of really good Irish players but I think they have just never been trained properly,” he says.

“The football infrastructure and the standard isn’t that great in Ireland, compared to Italy, but that’s understandable as it’s competing with rugby and Gaelic sports. In Italy I would be playing five times a week – four training sessions during the week and then a match at the weekend. That was the standard level of play that I would have been used to.

“At Tritium I had a specific goalkeeping coach but I didn’t have that here unfortunately. If I had been able to keep playing at the level that I was in Italy and stayed injury free I think I could have made it professionally.”

But the Italian goalkeeping odyssey along the Roebuck Road is soon to end as the 18-year-old prepares for his Leaving Cert. Having been knocked out in the second round of the John Murphy Cup by St Tiernan’s this year; Del Gener’s St Kilian’s soccer career has come to a close. He now hopes to study just up the road in UCD. Sadly though, he doesn’t plan on continuing his football career.

“It was a dream to be a professional when I was younger but since I moved to Ireland I’m just concentrating more on study now.”

1 Suarez’ Italian language exam rigged according to prosecutors
2 What next for green jersey hero Sam Bennett after toughest of Tours?
3 Awarding of 2023 Rugby World Cup to France part of Laporte investigation
4 LeBron James has become this generation’s Muhammad Ali
5 Gerry Thornley: Talk of Anglo-French hegemony is over the top
Real news has value SUBSCRIBE
Crossword Get access to over 6,000 interactive crosswords