Trapattoni hopes assistant will arrive over next 24 hours 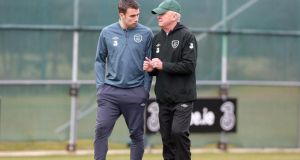 "Marco's pretty sick," said the manager, "but he was always a strong player and I think in 24 hours he will be ready I'm sure."

The Italian also expects just about every one of his players to be involved on Tuesday with Robbie Keane due in from the United States today and the likes of Glenn Whelan, Jon Walters and goalkeeper David Forde all expected to have recovered from minor knocks that sidelined them today.

"No, they (Forde and Walters) are okay, it was just a precaution. They are not in great pain. It was only for rest. I'm sure that tomorrow they can take part. Also Glenn (who has a slight knee problem), he's not swollen; that's important. It's just a knock and tomorrow he will be with us for sure."

Trapattoni says that he already knows what his starting 11 will be if there are no setbacks in training over the course of this week but the 74 year-old insists that the impact that some of those who are initially left out can make from the bench late on will be at least as important as who features from the start.

"It is not so important to worry so much about whether one or two start but to think about the right moment to change players during the game," he said.

"Without injuries we can have time to think about how we can change things, maybe after one hour so that in the last 30 minutes we can have fresh energy and also creative players for the strikers, this can be very important for us."

Swedish striker Zlatan Ibrahimovic, he insisted, would not be man marked, at least from the outset, with Trapattoni preferring, he says, to stick with Ireland's own game plan of trying to exert some pressure on the home side's back four.

"I know how he is playing at the moment for his club but I have to think about our balance and how our strikers can put them under pressure too."