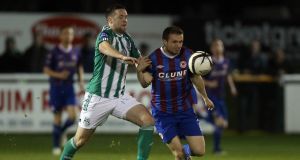 Bray Wanderers 1 St Patrick’s Athletic 3: It might not have felt remotely like the sort of night on which a league title is won with the stands only sparsely populated and the atmosphere generated by those who did turn out was nothing like what was experienced in Inchicore last week. The points moved St Patrick’s Athletic that much closer to the big prize all the same.

They may be struggling at the other end of the table but Pat Devlin’s side, to be fair, did what Dundalk had failed to last Friday with a late goal from Ismahil Akinade and a later John Mulroy shot that Brendan Clarke saved before the ball was scrambled to safety at least giving the league leaders a fright. Ultimately, though, the visitors deserved their win with goals by Anto Flood and John Russell either side of half time reflecting a growing superiority that actually yielded quite a few scoring chances before Christy Fagan finally put things beyond doubt almost five full minutes into added time.

St Patrick’s arrived looking to double their lead at the top of the table and, perhaps, make a little bit of a point after failing to impress, even as they won 3-0, in the cup on their last visit to these parts. It was never as poor as that but they certainly took their time about getting into things with Wanderers having the better of an opening half hour memorable mainly for how little they made of a succession of corners.

Gary Dempsey did his best to drive the locals forward and Kieran “Marty” Whelan had his moments but Devlin’s side had little bite up front where, when a chance worth talking about, finally came his way shortly before half time, Jason Byrne blasted high and wide.

By then the Dubliners had finally taken the lead. Killian Brennan had gone close with a curling free that had Quigley beaten but which also just about cleared the bar a few minutes before the midfielder stepped up to take a corner from the right.

Akinade cleared it with a decisive enough header back towards the sideline but Brennan’s follow up cross found both Russell and Flood at the far post where the former tried to head home but failed to make contact before the latter took a good touch then buried it from a couple of yards.

Flood, indeed, did well overall with the 28 year-old looking to be in confident mood long before he got his first league goal in two months. The striker put himself about well, causing both Bray centre backs problems at different times, but he showed a willingness to take it down and run with it on occasion as when, early in the second half, he cut in from the left and hit a lot shot towards the bottom right corner that Quigley had to nudge just wide.

By that stage, there was a growing sense that the visitors were finding their rhythm and none at all anymore that Wanderers might get away with anything more than a respectable scoreline.

Even that looked a little less likely when Buckley’s side doubled their lead in the 67th minute. Flood’s backheeled pass into the path of Bermingham was the highlight this time but there was nothing much wrong with the cross that followed or, for that matter, Russell’s headed finish.

With a quarter of an hour to play Flood made way for Fagan and the replacement striker looked lively for what remained of the game and even as his team mates looked briefly rattled at the back, he repeatedly threatened to score his side’s third before doing so with virtually the last kick of the game.