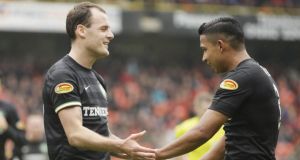 St Johnstone claimed third spot in the Scottish Premier League - and the final Europa League berth - after ending the season with a 2-0 victory over Motherwell.

A 1-0 defeat for nearest rivals Inverness in the Highland derby at Ross County meant the three points were enough for Saints to beat Terry Butcher’s men to European football.

Goals from Liam Craig and Nigel Hasselbaink secured the win against a Motherwell side who were already confirmed as SPL runners-up.

Inverness were denied a Europa League place following their first Highland derby defeat of the season.

Andre Hainault’s well-executed volley two minutes before the break saw Caley Thistle fall at the final hurdle in their quest to seal an unlikely European debut.

Inverness had not lost in five games against the Dingwall side this season but they were second best on Sunday after struggling to cope without several midfielders.

It was a cruel end to their most successful season, which also saw them lose a Scottish Communities League Cup semi-final penalty shootout to Hearts.

Celtic finished off their SPL campaign in style with a convincing 4-0 win over Dundee United at Tannadice.

Kris Commons gave the champions the lead with a 30-yard free-kick in the 11th minute before Georgios Samaras helped himself to a double, the first with a deflected drive in the 17th minute and the second a header 10 minutes later.

Neil Lennon’s side retained their grip on proceedings in the second half, but only added to their lead with five minutes remaining when substitute Anthony Stokes, on for Commons, made it 4-0, also with the help of a deflection.

It was a perfect warm-up for the Hoops ahead of next week’s Scottish Cup final against Hibernian at Hampden where they will look to clinch the double.