Sometimes ‘deserving’ to win actually has something to do with winning

Atlético Madrid weren’t prepared to accept fate. Can they do it again in the Champions League? 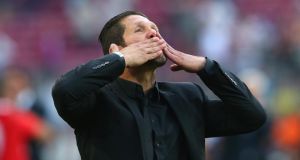 In sport as in life, you don’t always get what you deserve. There is a popular piece of circular logic which says the team that finishes top of the league is the one that deserves to win it. It’s a comforting lie we tell ourselves to obscure the reality that we are emotionally invested in a process that produces outcomes of horrible injustice.

A more realistic view – repeated by pragmatic competitors from Roy Keane to Snoop Pearson – is: “Deserve ain’t got nothing to do with it.” Bad things happen to good people. “Deserve” is just something in our imagination, an abstract concept that has no bearing on the impersonal workings of the universe.

But maybe there are times when “deserve” does have something to do with it. If a team believes absolutely that it deserves to win, there are moments when that belief hardens into the kind of determination that is not easily denied. And a team that’s not sure it deserves success is more likely to reconcile itself to failure.

On Saturday evening Atlético Madrid took the field at Barcelona, needing a draw to win the league. That they were so close to winning the title was already just short of a miracle. For every euro earned by Atlético Madrid, Barcelona earn four. Barcelona’s players are paid, on average, three times as much as their Atlético counterparts. That gap in pay is supposed to reflect an equivalent gap in quality.

So the fact that Atlético went into the deciding match leading by three points showed how much better their team had played all season. If the league was awarded to the team that deserved it most, there would have been no need to play the game.

Powerless
After 16 minutes Atlético’s top scorer Diego Costa was forced off with a hamstring injury. Powerless to help his team, and knowing he would probably miss next weekend’s Champions League final as well, Costa sat in the dugout, covered his head with a towel and cried. Seven minutes later the left midfielder Arda Turan was injured, and he too left the field in tears.

Then Barcelona’s Alexis Sanchez scored a goal of such improbable brilliance that it seemed almost unfair, smashing in a shot from an angle that essentially didn’t exist.

After 33 minutes, Atlético had already lost two of their best players and were a goal down to a team that had won 16 out of 18 home matches in the league. It was plain what fate intended for them.

But Atlético weren’t prepared to accept it. Two weeks earlier they had been a goal down at Stamford Bridge, against the masters of the cruel 1-0 win, and they came back to win 3-1. Last week their coach Diego Simeone had shown them videos of themselves, sweating in the pre-season training camp. His message was: you have given everything for this, you deserve this.

With magnificent collective conviction, Atlético began to bend fate to their will. Their furious pressing broke up Barcelona’s passing, preventing them from settling into the familiar pattern of frictionless domination. They began to test Barcelona’s mediocre goalkeeper, Pinto, with a succession of set pieces. They knew there was a vulnerability there.

Within 10 minutes of the Alexis goal, you could sense Barcelona were beginning to buckle. They were getting no inspiration from Lionel Messi, who was struggling to cope with Atlético’s vigorous marking and generally appeared to be in a foul mood.

Suspended
The photographs of the moment that was to win the title for Atlético show Diego Godin suspended in mid-air, watched by a circle of five Barcelona players: Busquets, Iniesta, Fabregas, Dani Alves and Mascherano. Godin is doubled over; he’s put every ounce of force he can muster into the header. Of the defenders only Mascherano has jumped – too far away to make any difference.

Atlético would win the league because of Barcelona’s inability to defend set-pieces, the great weakness that they’ve never bothered to do anything about.

The Barcelona crowd saluted the champions. They understood their team hadn’t deserved it. For a campaign distinguished only by corruption and ineptitude to have been crowned with the title would have been wrong – for them, for Atlético, and for Spanish football.

Barcelona losing the league to a rival of Atlético’s resources is a bit like Mike Tyson getting knocked out by Buster Douglas. It’s a stunning upset that was possible only because Barcelona have made a mess of themselves. Three years ago they were the best in the world. Since then they’ve had almost a billion more euro than Atlético to spend, and they’ve ended up with a lesser team.

The economics dictate that next season Barcelona will be back, and Atlético probably won’t. Chelsea will take Courtois and Diego Costa, other stars will move for more money elsewhere, and every big-club president in Europe will want to hire Simeone. But before the vultures can pick their bones clean, they have the chance to make history by winning the Champions League against Real Madrid. It would be the double of the century. Are they still greedy enough to feel they deserve it?

Ukraine’s win in Greece leaves Ireland needing to beat Germany 17:44
Ladbrokes and Coral to leave racecourse betting rings in Ireland and Britain 17:12
Barbarians’ coronavirus breaches will not be investigated by police 16:57
Cian Healy: ‘Realistically I got away with murder when I was younger’ 16:44
Masters cancel par-3 contest ahead of this year’s tournament 16:24

1 Cian Healy: ‘Realistically I got away with murder when I was younger’
2 Seán O’Brien: Anger over my parents’ break-up never left me
3 Johnny Sexton: ‘We just know we have to be a lot better in all areas on Saturday’
4 Gerry Thornley: Antoine Dupont and France look perfectly primed for Ireland visit
5 Ladbrokes and Coral to leave racecourse betting rings in Ireland and Britain
Real news has value SUBSCRIBE
Crossword Get access to over 6,000 interactive crosswords