Shamrock Rovers bow out of Europe despite away draw in Finland 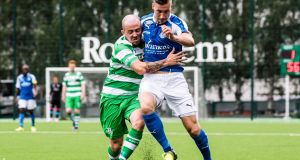 Shamrock Rovers bowed out of the Europa League in Rovaniemi on Thursday night despite a much improved display from the 2-0 home defeat in Tallaght.

Though Gary McCabe gave them a fully deserved lead, it was Rovers who came bearing gifts to the home of Santa Claus.

That came in the guise of Craig Hyland’s goalkeeping mistake which presented RoPS with a soft equaliser on the night.

Caretaker manager Stephen Bradley made a bold team selection, leaving club captain Stephen McPhail on the bench as McCabe came into midfield to skipper the side. Gavin Brennan dropped back to left back in place of the injured David O’Connor.

And there was a positivity and vibrancy about Rovers from the start with Dean Clarke, lively when he came on last week, central to their early probings.

Macedonian referee Dejan Jakimovski was unimpressed when Clarke appeared to be taken down in the area by RoPS captain Abdou Jammeh on three minutes.

Minutes later Simon Madden found space on the right from full back for the first time to cross for Clarke to plant his header over the bar.

But there was little surprise when Rovers got their reward on the scoreboard after 22 minutes.

This time Jakimovski had no choice in pointing to the spot as Juha Pirinen pulled down Clarke in the area after a surging run by Brandon Miele.

Despite attempts at some mind games from RoPS’s goalkeeper Antonio Reguero, McCabe calmly slotted the penalty into the bottom right corner.

Just when they looked right back in the tie, Rovers conceded a shocking equaliser five minutes later.

A howler by Hyland, whose clearance went straight to William Oluremi John, gifted the RoPS striker the chance to square the ball for Eetu Muinonen to tap into the unguarded net.

Remarkably, Hyland repeated the mistake before half-time, though, thankfully, this time his clearance cannoned out off John for a goal kick.

RoPS made changes at the break and they carved the first opening 11 minutes into the second half.

Aleksandr Kokko played a ball wide right to Janne Saksela who set up Robert Taylor whose first time shot was straight into the arms of Hyland.

Terrific defending at the other end then prevented Rovers regaining the lead on 66 minutes.

Madden worked a one-two with Patrick Cregg to get in behind to cross. That found Gavin Brennan whose low drive was brilliantly parried by Reguero.

The rebound fell for Gary Shaw who saw his shot brilliantly blocked by Juuso Hamalainen.

Rovers pressed until the death with substitute Seán Boyd having a last minute chance, but his close-range shot from Gavin Brennan’s pull back was blocked by Jammeh.