Brentford move up to third after they beat Luton Town 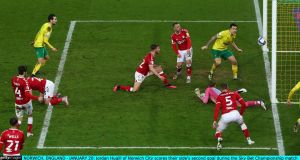 Norwich extended their lead at the top of the Championship to seven points as Jordan Hugill scored twice in a 2-0 home win against Bristol City.

Hugill struck in either half in a routine victory for Daniel Farke’s side, who have taken maximum points in eight of their last 10 league matches.

City, who have lost five of their last seven, failed to register a single effort on target and remain ninth in the table.

Brentford climbed three places up to third in the table after beating Luton 1-0 at home thanks to Saman Ghoddos’s first-half header.

It was Brentford’s first league fixture of the year following a coronavirus outbreak, while Toney and Luton defender Tom Lockyer were sent off in added time following an off-the-ball incident.

Assombalonga gave Boro a first-half lead and George Saville put them 2-0 up early in the second period before Loic Mbe Soh headed a late consolation for Forest.

The home side ended with 10 men after Yuri Ribeiro was sent off for his stamp on Saville. Boro are three points behind sixth-placed Bournemouth with a game in hand.

Scott Sinclair’s ninth goal of the season clinched Preston a 1-0 win at Birmingham.

Sinclair struck just after the hour-mark, while Preston also hit a post in the second half through Brad Potts.

Millwall notched just their second win in 16 league games, 1-0 at Huddersfield, thanks to Scott Malone, who scored against his former club inside the opening four minutes.

Cardiff slipped to their sixth straight defeat in all competitions, losing 1-0 at home to QPR.

Charlie Austin had a goal disallowed for QPR before Chris Willock struck midway through the second half to lift the Londoners seven points clear of the relegation zone.