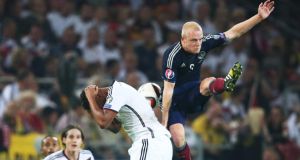 Germany’s Jerome Boateng clashes with Steven Naismith of Scotland during the Euro 2016 qualifier between Germany and Scotland in Dortmund. Photograph: Simon Hofmann/Bongarts/Getty Images 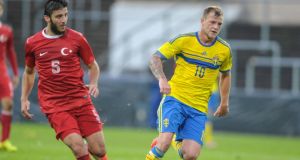 Turkey’s Hakan Cinemre (left) and Sweden’s John Guidetti fight for the ball during a Uefa European Under-21 qualifier. The Swede has completed a loan move to Celtic from Manchester City. Photograph: Bjorn Lindgren/EPA

Three minutes into the second half of last Sunday night’s game in Dortmund, Steven Naismith feinted his way past two German defenders, maintained his balance and smudged a low shot to the right of Manuel Neuer. The ball looked bound for goal, only to clip the post and roll away.

It would have made the score 1-1 and at that moment, as Naismith manoeuvred himself to shoot, it was possible to imagine Alex Salmond moving instinctively towards the edge of his chair in readiness to shout: this is our new Scotland!

As it was, Watford’s Ikechi Anya produced a Scottish equaliser less than 20 minutes later. Parity with the World Cup winners was to last a mere four minutes, but Scotland came again and their’s was a performance of growing cohesion and skill, one that to Irish eyes suggests securing second place in Group D will be hard-fought.

Scotland manager Gordon Strachan was rightly disappointed that the collective effort had not yielded even a point. In another way, though, a point had been made. Scotland’s team had stood up for itself in Germany’s favourite stadium. And Naismith was its emblem.

It was dark in Dortmund but, blossoming with the sunshine of confidence, the 27-year-old Everton inside forward is emerging as the flower of Strachan’s new Scotland. Had his shot gone in off that post at a time in the game when Scotland were jabbing Germany backwards, the result could have even been historic.

For many in Scotland, the timing would have been perfect, because last Sunday could be the last international Scotland play as part of Great Britain, as part of the United Kingdom.

Next Thursday’s referendum on Scottish independence remains in the balance, and a show of sporting energy rarely douses nationalism. A Scotland victory over the World Cup winners might have

forced some potential No voters to think again.

It is claimed that Scotland is on the brink of breaking away from the UK, whereas the reason so many are prepared to vote for independence is that to them it feels like England – London and the south of England – started a process of breakaway about 1979.

Former Tory leader Margaret Thatcher remains the most relevant politician in Britain. Scotland was not a big fan of her personality or politics, nor of the New Labour governments which have done so little to correct them. Even when Scot Gordon Brown became prime minister, many Scots were already travelling in another direction. Thatcher said there was no such thing as society; Scots want to prove there is.

This is where Naismith comes back in. From Stewarton in Ayrshire – the county of Bill Shankly – Naismith recently revealed a mentality different from that of the average Premier League footballer.

He has pledged to pay for four unemployed Everton fans to attend Goodison Park for every home game this season.

The son of a social worker, Naismith’s home background may be more significant in his gesture than his nationality, but it fits with a widespread Scottish view of the nation and its sense of community.

“The price of football is getting more expensive,” said Naismith. “And more and more fans who’d probably gone for years were struggling to go any more. We’d speak to the Jobcentres in local areas who would know who was working hard trying to get back into employment, maybe had a few setbacks and could do with a morale booster.”

Back in Ayrshire, Naismith returned to his youth club and sponsored it, though Stewarton Annick have Dyslexia Scotland on their jerseys, rather than Naismith’s name, as Naismith volunteers for the organisation.

Such actions earned the player praise from, among others, (English) trade union leader Len McCluskey, who supports Liverpool.

The reason Naismith is on Merseyside is, again, Scottish and economic. Having begun playing at Kilmarnock he was transferred to Rangers in 2007, when the Glasgow club were still a Champions League outfit, one capable of winning 3-0 at Lyon and of drawing 0-0 at home to Barcleona. Naismith appeared as a substitute in the Nou Camp, when Thierry Henry and Lionel Messi gave Barca a 2-0 victory.

But when it transpired that Rangers had been living beyond their means and the club went into financial meltdown in 2012, Naismith refused to have his contract transferred to the new company at Ibrox. He left on a free for Everton.

Around Goodison Park, it is fair to say, there was some scepticism as to the true quality of Scottish football and Scottish footballers. It extended to the player who said a fortnight ago: “When I first moved I definitely felt a bit inferior. It’s been a problem for Scots boys in the past and I was the same.”

But he gradually won over doubters, including himself, first under David Moyes, then under Roberto Martinez. This season Naismith has continued to develop, scoring in Everton’s first three games – Leicester, Arsenal and Chelsea – and he is giving Everton a welcome alternative to Romelu Lukaku.

That is in the way he plays. Off the pitch it is in the way the player thinks and acts. For Scotland it is the same. At a time when it matters, Naismith has developed into a Scottish independent.

Inferior, no more. Celtic arrival Guidetti comes from high-scoring spell on loan at Feyenoord If there is a fresh mood around the Scotland team, it does not apply to the Scottish game as a whole. Celtic’s dismal showing in the Champions League qualifier(s) hurt self-esteem as well as denying the league a Uefa co-efficient payment.

Rangers remain riven by boardroom division and there is a chance of another implosion before the end of this month. Promising youngsters such as Ryan Gauld and Ryan Fraser have left the Scottish game as teenagers, further reasons not to go to see Dundee United or Aberdeen on a Saturday. As for Hibs and Hearts . . .

But perhaps this lunchtime in Paradise there will be something to lift domestic spirits. If he is fit, John Guidetti is expected to make his Celtic debut against Aberdeen.

Guidetti is a 22-year-old Swedish striker who has been sent out on loan by Manchester City. And he has quite a reputation.

It comes from a high-scoring spell on loan at Feyenoord, where the fans loved him. I saw Guidetti in the flesh then and he was relentless, the type to make a crowd roar. And how the average Scottish Saturday needs that.