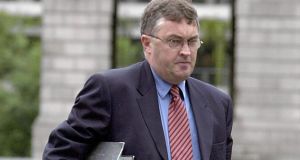 The recently appointed chairman of Bray Wanderers, Denis O’Connor, featured in the Moriarty tribunal in relation to a property deal involving a football stadium in Doncaster, England.

The tribunal conducted inquiries into the ownership of Doncaster Rovers Football Club Ltd (DRFC) because the businessman Denis O’Brien had bought it in the late 1990s with a view to having the club move to a new grounds, so that the old grounds near the city centre, the lease on which was owned by DRFC, could be developed.

The tribunal’s inquiries were prompted by suspicions that the politician Michael Lowry might have had an interest in the deal, something both Lowry and O’Brien said was not the case.

While it was investigating the matter, the tribunal discovered that O’Connor, who was Lowry’s accountant and whom the tribunal believed was helping it throw light on Lowry’s affairs, was in fact conducting negotiations with third parties about evidence the tribunal was interested in, without the tribunal’s knowledge.

The tribunal learned of the existence of a fax from a Northern Ireland businessman and land agent, Kevin Phelan, that appeared to link Lowry with the Doncaster project. Phelan, who declined to appear to give evidence to the tribunal, provided a letter saying that the reference to Doncaster in the fax was a mistake.

The tribunal later discovered that, at the time Phelan supplied this letter, he was paid £150,000 following negotiations with O’Connor. The money came from a UK company, Westferry, which was owned by O’Brien, and among the issues examined by the tribunal was whether O’Connor, in his negotiations with Phelan, was acting for Lowry or for O’Brien.

In his final report, the tribunal chairman Mr Justice Michael Moriarty pointed out that, when queried by the tribunal in the course of private inquiries, O’Connor had said repeatedly he had no role whatsoever in the negotiations.

“Following the delayed production of the files concerning the negotiations, it became clear that he in fact played a central role in negotiations with Kevin Phelan on Westferry’s behalf,” the judge noted.

The tribunal was told by O’Brien the money paid to Phelan was in settlement of fees he said he was owed for work done.

O’Connor was involved in a second set of negotiations that saw Phelan being paid money that he, Phelan, said he was owed for fees. Again it was against a background of inquiries by the tribunal into matters about which Phelan had information.

The tribunal was given letters from a solicitor’s files that appeared to have been doctored so that they lessened Lowry’s involvement in a number of land deals in the UK. At around the time Phelan produced an “innocent explanation” for this, he received £65,000 from one of the companies involved in the land deals.

In his ruling in relation to this episode, the tribunal chairman said O’Connor and Lowry had been involved in a “choreographed falsehood” that was “orchestrated by O’Connor and Lowry with the objective of misleading the tribunal”. He found that Phelan would not have written the innocent explanation letter if he had not been paid the £65,000.

The tribunal found that Lowry had no beneficial interest in the Doncaster deal, though he did have some involvement at an early stage.

O’Connor is a former managing partner with financial services firm Evovis BBT. The firm took over as auditor to Bray Wanderers in January 2014.

O’Connor is also a director of Mustardside Ltd and Bindford Ltd, two Dublin companies that are involved in property development projects in Dublin with Wicklow developer Greg Kavanagh and members of the Kiely family from Foxrock in Dublin.

1 Seán O’Brien: Anger over my parents’ break-up never left me
2 Madness or defiance? The GAA is taking a huge gamble in staging Championships
3 Plenty of positives for Farrell as Ireland hit the ground running
4 Sportsman to statesman, Marcus Rashford is a ray of light in the darkness
5 Will Connors chops his way to the front of Ireland’s openside queue
Real news has value SUBSCRIBE
Crossword Get access to over 6,000 interactive crosswords