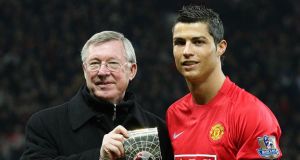 Cristiano Ronaldo with former manager Alex Ferguson at Manchester United. The Real Madrid striker has admitted he misses United but it is not yet clear how Ferguson’s departure will affect his view.

Cristiano Ronaldo continues to resist renewing his contract at Real Madrid but Manchester United face a struggle if they are serious about re-signing him now.

Ronaldo admitted earlier this season he was “sad” at the Santiago Bernabeu and his relationship with the president Florentino Perez is distant. Yet, while a departure is possible in the mid- to long-term, this summer may prove premature.

Ronaldo has said he intends to honour his contract, which expires at the start of July 2015 when he will be 30, but has repeatedly avoided calls to publicly commit his future to Madrid.

He has admitted he misses Manchester United and held up his hands to apologise when he scored for Real Madrid at Old Trafford.

After the game he described the occasion as “too strange”. It is not yet clear how Alex Ferguson’s departure will affect his view, however.

Ronaldo’s preference is to run down his contract to strengthen his hand, allowing him to speak freely with a new club from January 1st 2015 or negotiate a departure from a powerful position in the summer of 2014.

Any transfer fee would either be substantially reduced or unnecessary, enhancing any signing-on fee to the player and making him easier to sign.

It is a tactic that carries very little risk: Ronaldo is too good a player for Madrid to force him out or to find himself without any suitors, particularly at a reduced fee or no fee at all.

Madrid have briefed they are confident the Portuguese will begin talks over a new deal once this season is over, but so far their advances have met with silence. Ronaldo has refused even to meet with the club.

Madrid insist Ronaldo is not for sale and his largely symbolic buyout clause stands at €1bn.

Given their concerns over the Portuguese player allowing his contract to run into its last 18 months, Madrid would listen to offers this summer but they would expect to recover very close to the €80m spent on him.

Even if Madrid were to welcome bids at this stage, Ronaldo cannot be moved on without his agreement. He still wants to win the Champions League in Spain.

Summer elections will ensure Perez handles Madrid’s franchise player cautiously, all the more so after the imminent departure of manager Jose Mourinho.

Perez is likely to stand for president unopposed, but he has already begun the search for vote-winning signings, starting with an attempt to torpedo Barcelona’s move for Brazil striker Neymar. However, Perez knows Neymar would prefer to go to the Camp Nou and there are very few signings that can carry the weight that Ronaldo does.

On Wednesday night, Ronaldo celebrated his second goal against Malaga by running to the fans and gesturing to the pitch.

Lip readers could not confirm whether he shouted: “I do my talking here (on the pitch)” or “I am staying here”.

Ronaldo also appeared to shout something to the Madrid bench. In recent weeks there have been glimpses that his relationship with Mourinho is not as idyllic as is often assumed.

Potential suitor
He had already told one potential suitor he would not move to that club if Mourinho did. Now, he has the opportunity to continue his astonishing level of performance in the absence of the coach.

Meanwhile, Frank Lampard’s future at Chelsea will be determined at the end of the campaign, with the prospect of Mourinho returning to the club likely to enhance the veteran’s chances of a new contract.

“I think it would be a great thing for the club,” said Lampard. “He is a successful manager and would be great for any club. He is certainly one of the greatest managers, if not the greatest, in world football.”
Guardian Service