Robbie Brady bags brace but Hull bow out of Europe 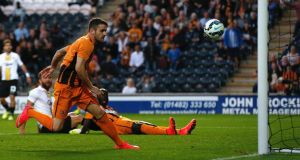 Hull’s first Europa League campaign ended in disappointment at the play-off stage after a vital away goal for Lokeren saw the Belgian side through at the KC Stadium.

Having been beaten 1-0 in the first leg, Hull needed a convincing win at home but while Robbie Brady’s brace was enough to ensure a 2-1 victory on the night,

The Tigers’ hopes of finding an all-important third that would have swung the game back in their favour went up in smoke in the 72nd minute when Ivorian striker Yannick Sagbo was sent off.

With 10 men the task proved too much for Steve Bruce’s side but there was late drama as Tom Huddlestone’s late strike - the last kick of the game - was blocked on the line by defender Alexander Scholz.

Bruce had gambled with his team selection, ever mindful not to compromise the Barclays Premier League campaign, leaving the likes of Huddlestone, Nikica Jelavic and Tom Ince out of his starting XI amid six changes from the weekend draw with Stoke.

All three came on as second-half substitutes but it was one of the players who had been rotated in, Brady, who did most to further the Hull cause.

He bundled home after just six minutes for his first goal in nearly a year and, after Remacle’s well-struck equaliser, restored the lead with a cool penalty nine minutes into the second half.

But in truth Hull have not looked the part in any of their four European outings to date, edging past Slovakia’s AS Trencin then making a mountain out what had seemed a favourable play-off draw.

McFarland reflects on a job well done 19:29
Glasgow slam European door shut on Munster 19:29
Wexford strike late to see off Galway 18:37
Ulster huff and puff their way past Bath and into the quarter-finals 18:09
Haaland hits the ground running with hat-trick on debut 17:44

1 Leinster qualify as top seeds with Benetton win
2 St Michael’s conveyor belt showing no signs of slowing down
3 Ulster huff and puff their way past Bath and into the quarter-finals
4 Welcome to Iten in Kenya – home of champions and cheats
5 Haaland hits the ground running with hat-trick on debut
Real news has value SUBSCRIBE
Crossword Get access to over 6,000 interactive crosswords