Pep Guardiola confirms he has decided his Bayern Munich future 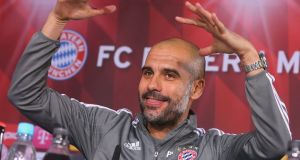 Bayern Munich coach Pep Guardiola has confirmed he has made up his mind about his future. Photograph: Getty

Bayern Munich coach Pep Guardiola has confirmed he has made up his mind about his future, without revealing what decision he has taken.

The Catalan’s contract with the German champions expires in the summer and Bayern have been putting pressure on him to commit to a new deal before the end of 2015.

An official announcement is due after Saturday’s Bundesliga game at Hannover, but Guardiola revealed at a press conference on Friday that he has made up his mind — and club chairman Karl-Heinz Rummenigge has been informed.

“Kalle knows absolutely everything,” Guardiola said, before an end was brought to any further questions about his future.

“The club, Karl-Heinz Rummenigge and I have said time and time again that we will say something after our final game in Hannover, and that’s how things are going to stay.

“I’m just focusing on Hannover. I’ve been watching their games.”

Speculation is growing that Guardiola will leave Bayern in the summer, with Spain’s El Pais on Friday following Marca by stating that reliable sources have confirmed his departure from Munich.

Meanwhile Thomas Muller has extended his contract with Bayern until 2021, bringing an end to speculation linking him with a summer move.

The Germany international has been regularly linked to Barclays Premier League clubs, but the 26-year-old has now committed his future to the Bundesliga giants.

Bayern have also extended Jerome Boateng and Javi Martinez’s deals until 2021, while Xabi Alonso’s new contract keeps him at the Allianz Arena until 2017.

“I am proud and happy that I have extended my contract.”

Muller is currently enjoying one of his most prolific seasons in a Bayern shirt, having netted 13 Bundesliga goals with less than half of the season completed.

He has also scored five times in the Champions League, helping the Bavarians set up a last-16 tie with Juventus.

Boateng has become a mainstay of Bayern’s defence and Martinez, who joined from Athletic Bilbao for a club-record fee of Eur40million in 2012, has been a key player for Pep Guardiola when he has been fit.

Alonso, 34, showed he still has plenty to offer with a stunning goal to book Bayern’s place in the quarter-finals of the DFB-Pokal in midweek.

He has extended his stay in Munich by a year, with next season perhaps being the last of his successful career.