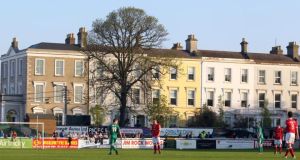 A view of the Carlisle Grounds, home to Bray Wanderers. Photograph: James Crombie/Inpho

The new owners of Bray Wanderers entered into a commitment that they would not seek to acquire the team’s grounds in the Co Wicklow town without having delivered a new location for the club.

The Carlisle Grounds in Bray are close to the seafront and across the road from the Dart station and would be a prime development site if they became available.

There are plans for an extension to the Luas that would stop at the grounds, which would further increase the attractiveness of the site.

The grounds are owned by Wicklow County Council. The club was given a 35-year lease in January 2001 which gives it the right to the grounds for a minimal rent, as long as the grounds are used for soccer matches. Any development of the grounds would require a deal with the council.

Prior to the takeover, Milway gave a commitment that, in consideration for the transfer of the shares, it would commit to operating and managing the club to play in the League of Ireland, support the club and foster its development as a community organisation and seek to ensure the club adheres to the terms of the Carlisle Grounds lease.

It would “not take any steps to acquire, by any means, direct or indirect, by act or omission, the Carlisle Grounds until such time as the facilities [outlined above] have been delivered to the club”.

Late last year, it appeared the McGettigan Group, which owns the Royal Hotel, Bray, was going to invest in the club, but the deal did not go ahead. The group is now looking to have €30,000 it invested returned. Mr O’Connor said relations between the two sides broke down in April, leading to the deal with Milway.

1 Seán O’Brien: Anger over my parents’ break-up never left me
2 Plenty of positives for Farrell as Ireland hit the ground running
3 Madness or defiance? The GAA is taking a huge gamble in staging Championships
4 Ireland 50 Italy 17: Ireland player ratings
5 Will Connors chops his way to the front of Ireland’s openside queue
Real news has value SUBSCRIBE
Crossword Get access to over 6,000 interactive crosswords