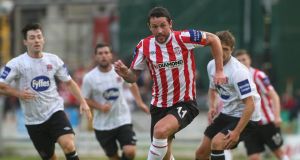 Stephen Kenny will have left the Brandywell with a smile on his face after Dundalk’s late, late winner last night.

And his decision to introduce Tiernan Mulvenna in the 88th minute at the expense of Darren Meenan proved crucial. Mulvenna netted the only goal with his first touch of the ball in the 91st minute as he guided Eoghan Osborne’s incisive pass to the net.

Derry can have no complaints as Dundalk were deserving winners. They looked the sharper side during the first half with the Kurtis Byrne and Richie Towell both going close.

In the 20th minute City’s Rory Patterson charged down a clearance by Peter Cherrie but the visiting goalkeeper made amends.