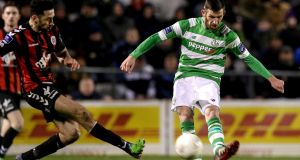 More blood and guts than gutless this from Shamrock Rovers who comprehensively drew a line under their poor run of recent results against their old rivals with a battling display at Dalymount Park that included some glorious goals for their supporters to savour.

Brandon Miele got two of them and vied with Gary McCabe for the man of the match although Gavin Brennan sort of stole the show with his side’s fourth in the 76th minute, a beautifully curled strike to the top left corner from 25 yards out where the amount of space he was given suggested Bohemians had finally thrown in the towel.

It was quite a turnaround for Rovers had started slowly with the visitors initially second to every ball in midfield, it seemed, and sleepy at the back where they rode their luck a little with the number of chances they allowed Bohemians to create.

Eoin Wearen wasn’t far away with a long range effort and Keith Buckley forced a rare save from Barry Murphy when he should, perhaps, have made more of some great work by Ayman Ben Mohamed.

The best of those chances fell to Ismahil Akinade who would, one suspects, have capitalised on Max Blanchard’s fluffed attempt to clear a Derek Pender cross last season. On this occasion, he hesitated just long enough to allow Simon Madden throw his body into the path of the shot. It must have hurt the full back but not as much as some of the challenges that flew in over the course of the half hour that followed.

For the most part it was no more really than the neighbourly niggle you would expect from these two when they meet and certainly they, or the thought of the meeting to come at the interval with their manager, livened the visitors up.

The spell culminated, though, in a particularly wild looking challenge on Madden by Lorcan Fitzgerald on the stroke of half-time that looked even more ill-advised when the defender picked himself up to kick off a well worked set piece that involved a short angled free to Mikey Drennan whose shot was blocked only for McCabe to follow up with a rasping, low drive that might have clipped a couple of bodies on the way to the net through a very crowded area.

The stadium announcer took the opportunity to remind everyone at half-time that 1-0 to Rovers was the score last June when Fenlon’s last paid a visit “so let’s see what happens”. We didn’t have to wait long to see that things were going to turn out differently this time.

Almost from the restart Paddy Kavanagh got the locals going with a looping shot that hit Murphy’s crossbar before flying out but almost from his kick-out, Miele doubled his side’s lead with the young midfielder finishing coolly with a low shot to the far corner from a tight angle after a neat one-two with Gary Shaw.

His second was better. With 17 minutes remaining and Rovers now completely in control, McCabe sent him racing into space on the left with a wonderfully weighted ball over the top and the 21 year-old controlled it nicely before slotting his shot past the helpless Dean Delany.

Brennan’s strike then prompted a one idiot pitch invasion which in turn led to a few fans from both sides weighing in behind one of the goals. The Guards quickly got things under control, though, and Bohemians made a vain attempt to grab a goal late on. Not, of course, that it would have been of very much consolation to the locals.