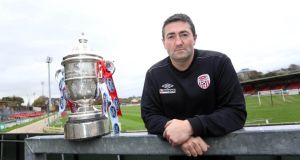 But he’s probably steered clear of citing the example of Peter Hutton, his rival this Sunday, who would feature in quite a few chapters of any book about the Brandywell outfit.

Having played more than 600 times for the Candystripes, Hutton will bring his young side to Dublin this Sunday looking to round off a roller coaster of a season on a thrilling high.

Like the appointment of John Caulfield at Cork City, Hutton’s appointment has excited fans and inspired young, local players. The challenge now is to complete the deal by delivering a trophy to round off his first campaign in charge.

In Hutton’s case, it’s actually less than six months since he took charge, of course, with the 41-year-old stepping up from the assistant’s role when Roddy Collins’s position became untenable in the wake of a desperately poor start to the season during which disappointing results were almost overshadowed by the Dubliner’s lack of ambition for the side.

In April, following a defeat at Oriel Park, Collins admitted his side had been “brutal to watch,” but insisted that it wasn’t his brief to entertain the Dundalk fans.

The much travelled manager may well have had a different idea as to what precisely his brief was for within a matter of weeks he was gone, Hutton promoted and most of the outside players the former Bohemians boss had brought in were being nudged towards the door.

“Roddy was supposed to tweak things a bit,” says Arthur Duffy, who has covered City for local paper the Journal over many years, “but instead he started a rebuilding process and that’s not what was wanted. Hutton has taken a step back and got things back on track, it’s very much a local team now, with lads from the north east generally and the ones who aren’t from here live here.

“That’s partly because the days of being able to pay big name players to come up from Dublin are gone but it also matters to the fans who are happy to see locals guys playing in the team and a legend like Peter Hutton managing it.”

At Cork, former chairman John O’Sullivan readily acknowledges the important contribution made by Tommy Dunne in the difficult period that followed the rescue of the club by supporters’ group FORAS. Still, he admits, former striker Caulfield’s appointment as boss represented a major boost to morale.

“Tommy did a very good job to steady the ship particularly in that first year but John was someone who really understood the club, he was a galvanising force and restored some of that siege mentality.”

Hutton’s re-emphasis of Derry’s north eastern grounding has resulted in players like Limavady’s Stephen Dooley and Philip Lowry from Portstewart being recruited, then handed major parts to play. Both are virtually certain to start against St Patrick’s on Sunday.

In a year when any hopes of a title challenge were surrendered early due first to poor form then later, a focus on qualifying for Europe via the league, the crowds have not recovered in the way that might have been hoped. But Derry should be well represented in the stands on Sunday; it will be for sure on the pitch and in the dugout.