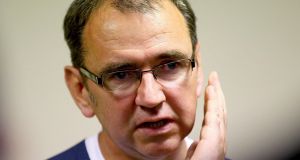 Shamrock Rovers take on Wexford Youths in their first home game of the season this evening.

Manager Pat Fenlon is hoping that Danny North can build on the goal he got at the Showgrounds and make a major impact for the Dubliners as they look to improve on last year’s third-place finish.

“Not making excuses for it but Danny didn’t play enough for us last year,” he says. “Keith Fahey we lost early too. They’re ones in the team who you’re hoping would chip in with a few goals; Danny definitely and Keith making goals. That was one of the reasons we felt we needed to be a bit more creative this season. Killian Brennan has come in and we’ve got a bit more pace in the team with Dean [Clarke] and Gary Shaw.

North’s arrival at the club caused some excitement but injuries have prevented him delivering in the way that the fans would have hoped, something that Fenlon reckons may change now that he has come through a good pre-season without any problems.

“I think he’s in better condition this year. When you’re picking up injuries, you get into that rut. But he’s got through the whole pre-season without anything. But it’s important again, that as well as working him, with the games coming thick and fast, it’s making sure he recovers properly because he is a natural goalscorer.

He seems certain to be out there this evening and Fenlon may hand Patrick Cregg a start after his late appearance last week went off without a hitch. Stephen McPhail misses out again, though, as does Luke Byrne with Gavin Brennan likely to start at left back again.

Wexford are likely to be much changed from the midweek Leinster Senior Cup win but Peter Higgins, Shane Dunne and Aidan Keenan are all out still ruled out.

Sligo, meanwhile, head to Bohemians without Craig Rodden or Kieran Sadlier, both of whom are suspended after having been sent off against Fenlon’s men. Roberto Lopes will missing from the home side for the same reason.

John Mountney is a doubt for Dundalk’s game against Finn Harps but Barry Molloy, Sean Houston and Michael Rafter are all likely to miss the Donegal club’s first visit in almost a decade to Oriel Park.

Elsewhere, Liam Buckley has much the same squad available as he heads to Longford looking to improve on the result against Galway while United are without Armin Aganovic (knee), Mark Ludden (foot) and Alex Byrne (groin) as they welcome to Terryland a Bray Wanderers side that has Curtis Murphy suspended.

1 Six Nations: Ireland are contenders but England still the team to beat
2 Mike Catt hopes to have Irish backs purring in Six Nations
3 In Donegal Michael Murphy is seen, simply, as a godsend
4 Owen Doyle: Creeping professionalism of schools rugby a threat to the game
5 Gary Neville in Qatar an exercise in semi-journalism
Real news has value SUBSCRIBE