Busy schedule ahead for league leaders 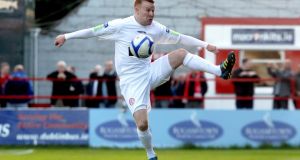 St Patrick’s Athletic kick off what promises to be a busy spell with a home match against Bray Wanderers tonight, with newly signed left-back Lorcan Fitzgerald in contention to make his debut for the league leaders.

The 24-year-old former Sporting Fingal and Shelbourne defender missed the first half of this campaign after breaking his leg at the tail end of last season, but Liam Buckley is glad to have another player he has worked with previously on board, as the Dubliners look to build on what has been a good few months.

“With Jake Carroll going, Lorcan is an obvious replacement,” said Buckley, who anticipates some further movement during the transfer window.

“I think there’s a few here that will feel they need to be playing and a couple might move on. If that happens we’ll certainly look to bring in a couple of lads because if things go well we’ll have a lot of games coming up.”

They’ll be looking to bounce back from the pre-midseason break defeat to Dundalk against a Bray side that has a decent record at Richmond Park over the last few years.

Tend to struggle
Killian Brennan is suspended for the hosts while Bray, rather unusually, have a full squad to choose from. The visitors tend to struggle to keep clean sheets against St Patrick’s but they’ll be encouraged by the number of goals their strikers, especially Jason Byrne, have been getting of late.

Just three points off top spot with a game in hand, Derry must take on Bohemians without their leading scorer, Rory Patterson, who is suspended, and Declan Devine will also be without Barry Molloy, Thomas Crawley and Dermot McCaffrey.

However, the Dubliners have their own problems, with Owen Heary, Derek Pender, Dave Mulcahy, Dave Scully, Stephen Traynor and Ryan McEvoy set to sit tonight’s game out. Shane Fitzgerald and Dwayne Wilson, meanwhile, have been released as Aaron Callaghan starts making way for some summer signings.

Sligo Rovers are also short of key players as they head to Shelbourne with Anthony Elding suspended, Raffaele Cretaro, Evan McMillan and Danny Ventre injured and Pascal Millien away on international duty.

Anxious to build
Their hosts, anxious to build on the recent win against Bohemians, are without Stephen Hurley, Jack Memery (both suspended) and Dean Kelly (hamstring) – who got two goals last time out – but Gareth O’Connor could make his first start since joining and Glen Cronin is one of a number of players to have shaken off injuries during the break.

Like Buckley, Mick Cooke will have one eye on Europe next week but he has real problems tonight ahead of the game against Shamrock Rovers as Ryan Brennan, Alan Byrne, David Cassidy and Alan McNally are all suspended. Trevor Croly is without David Elebert and may be missing Jason McGuinness but Mark Quigley is available again.