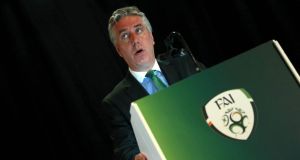 The FAI cancelled its traditional post AGM press conference in Arklow today with John Delaney telling delegates from clubs and affiliates that it was not in the association’s “best interests” for questions to be answered regarding its finances.

Various attempts to get Delaney or other senior members of the association to speak with the press after the AGM had concluded were then rebuffed.

Association officials had refused to answer questions in relation to the 2012 accounts over the past couple of weeks but it had been expected Delaney would, as is the tradition, deal with queries on the day of the meeting.

The accounts for 2012 reveal the organisation had net debts of €63 million, and turnover had declined from €45 million to €39 million, on December 31st. The association has, to date, only been paying interest on its stadium borrowings, but a huge portion of its debt – around €53 million - is scheduled to be repaid between 2015 and 2018.

Delaney, along with the Finance Director Tony Dignam, nevertheless insisted the association is in a position to pay off its debts by 2020, the target date that it has set itself.

Dignam, however, did confirm today that the association had received its money for participating at Euro 2012 and its Uefa Hat-trick funding for last year, a total of €11 million.

He said the FAI incurred some “associated costs”.

However, the fact the money is included in the association’s €39 million turnover suggests the €6 million decline in this figure might have been far worse but for the senior team making it to Poland last year.

As has become the norm, delegates failed to raise a single issue in relation to the finances from the floor. Carl Bond became the first person in three years to ask a question of any sort when he attempted to have a motion in relation to schoolboy football, that had already been withdrawn, ruled out of order.

Pat Kelly of the SFAI, who was awarded honorary life membership of the association, hailed the transformation of the organisation that has taken place over the course of the time involved.

Twenty years ago the FAI was “personality driven,” but “all of that has changed”, said the Waterfordman, before referring to the organisation’s “outstanding CEO”. Earlier, Delaney had, as is also traditional, featured around 60 times in a short video, set to music, covering the activities of the Festival of Football that leads up to the AGM.

The highly unusual move to not have a press conference, meanwhile, followed an earlier refusal to allow FAI Council member Paul Cooke represent Waterford United at the meeting on the basis that the club has not paid its affiliation fees to the association.

Cooke, who has been critical of the way in which the issue of the association’s finances has been handled and who was recently been disciplined by the organisation after appearing on an RTE Primetime programme that dealt with the topic, suggested it was normal practice to agree to have such fees deducted from money due to clubs from the association.