Home side fade away in the second half 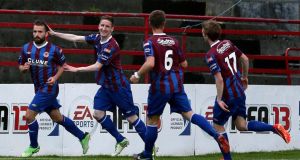 St Pat’s joined Sligo Rovers at the top of the Premier Division table thanks to a brace from Christy Fagan and a third goal from Chris Forrester in this Dublin derby which saw Shelbourne start very well before falling away in the latter stages of the second half.

With 21 points separating the two sides before kick-off, many in the crowd of 1,418 could possibly have been expecting a more one-sided game but that was far from the case. Temporary manager Kevin Doherty watched on as his Shels side matched Pat’s from the first whistle, despite playing without several key men.

Shels looked lively from the start and could have taken the lead on 13 minutes had Sean Brennan been more accurate with his stinging shot that was just inches wide. Ger O’Brien and Forrester had chances for Pat’s after that but neither could find the target. Brennan then had another opportunity to open the scoring for the home side on 42 minutes when he took possession on the right of the Pat’s goal but his effort flew wide.

After all the good work Shels found themselves behind on 53 minutes when Fagan headed in from Ian Bermingham’s cross following a sustained period of Pat’s pressure. Fagan then doubled Pat’s lead on 59 minutes when he finished from close range past Ger Hanley in the Shels goal after Hanley had blocked Killian Brennan’s initial effort following a brilliant cross from the right wing by John Russell.

West Ham rue Fabianski fumble as Liverpool strike from behind 22:13
Champions Dundalk march on as Cork City remain goalless 22:16
New man Marshall sees Shamrock Rovers past Waterford 21:39
City Island to return to hurdles and take on Paisley Park in stayers’ 20:50
McIlroy takes his foot off the pedal and will skip the Honda Classic 20:01