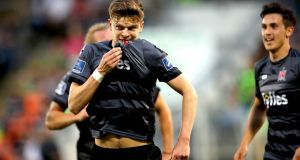 Seán Gannon’s 73rd-minute goal was the difference at Tallaght on Friday night as Dundalk edged a nail-biting affair against Shamrock Rovers.

In addition to securing their seventh straight top-flight victory in all competitions, the Louth men also moved eight points clear of Rovers at the summit of the SSE Airtricity League Premier Division table.

For his side’s latest visit to the capital, Chris Shields was asked to keep tabs on Rovers attacker Jack Byrne. The former Manchester City youth player operated in an advanced position behind lone striker Dan Carr and he dragged a left-footed shot just past the post on five minutes.

Despite this early goalmouth action, chances were few and far between for much of the opening period. Yet, it was proving to be a fiery encounter and Rovers full back Trevor Clarke was cautioned for a robust tackle on John Mountney.

The Dundalk winger subsequently found himself in the referee’s notebook for a late challenge of his own on Seán Kavanagh.

As the interval approached, Rovers started to grow in confidence. Ronan Finn got on the end of a precise Carr delivery – only for the retreating Dane Massey to dramatically clear off the line.

Byrne was largely on the periphery of the game, but he came to life on 38 minutes when his long-distance drive smashed the underside of the crossbar.

This was a major let-off for Vinny Perth’s champions, who were hoping to extend their unbeaten league run to 13 games. Nevertheless, they remained on level terms at the break and played with much more urgency once the action resumed.

Patrick Hoban had a shot blocked eight minutes after the resumption, while Patrick McEleney later hit the side-netting.

Rovers maintained a formidable counterattacking threat and this almost cost Dundalk dearly on the hour mark.

When Clarke broke into the opposition half, Lilywhites netminder Gary Rogers came storming out of his goal to haul down the raiding defender. Despite the vocal protests emanating from the stands, the Meath native escaped with a yellow card.

The resulting set-piece was cleared by the Dundalk defence and moving into the closing quarter, the tie remained delicately poised. That was until Gannon finally produced a breakthrough finish.

Picked out inside the penalty area by substitute Jamie McGrath, the marauding full back squeezed the ball underneath Rovers custodian Alan Mannus. This sent the Dundalk faithful into raptures and left the hosts with precious little time to address the balance.

Aaron Greene added fresh impetus off the bench and he fired a shot agonisingly off-target five minutes from the end. Try as they might, though, Rovers ultimately lost further ground in their quest for the title.