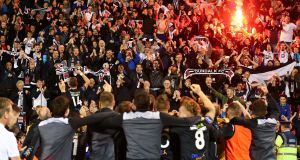 Dundalk are League of Ireland champions for the second year running after a 1-1 draw away at Shamrock Rovers secured the title. Photograph: Inpho

They say a good neighbour is always there to lend a helping hand and so it proved last night as Dundalk were crowned SSE Airtricity League champions in Tallaght.

It looked like the champagne would remain on ice as the game ticked towards the final seven minutes with Danny North’s 46th minute goal separating the teams.

However, Richie Towell’s 83rd minute penalty - his 22nd goal of the season - coupled with Cork City’s 1-1 draw against Dundalk’s Louth counterparts, Drogheda United, confirmed the Lillywhites as worthy champions for the 11th time in their history.

Speaking in the build up to the game, Dundalk boss Stephen Kenny did his best to dampen the hype surrounding the fixture which presented his side with the opportunity of retaining their league crown against the club which dispensed of his services in 2012.

However the significance of securing first ever back-to-back titles at the home of their historic rivals was not lost on the people of Dundalk as more than 800 supporters made the journey from the border town to urge their team over the line.

The task facing Dundalk was far from straightforward. Rovers came into the game having suffered just one league defeat at Tallaght and they started on the front foot with Stephen O’Donnell having to intervene to cut out a Gavin Brennan cross after less than two minutes after Paddy Barrett gave the ball away all too easily.

Kenny’s title chasers settled to the task and 12 minutes had elapsed when Ronan Finn, a league winner with Rovers in 2011, was denied by a last gasp tackle from Maxime Blanchard after being picked out by a cute Darren Meenan pass inside the penalty area.

Things began to heat up as the game drifted past the quarter hour mark with Rovers’ Danny North and Dundalk skipper, Stephen O’Donnell booked in quick succession. And from the free-kick that followed the O’Donnell caution, Mikey Drennan flashed a half volley over the top from David O’Connor’s cross.

Dane Massey then showed good positioning to cut out Gavin Brennan’s cut back in the 23rd minute after his goalkeeper, Gary Rogers, failed to collect a David O’Connor cross under pressure from Drennan.

Rovers continued to look inventive and Drennan showed great reactions to meet Brandon Miele’s fizzing cross with his head only to see the effort go wide of the target on the half hour.

At the other end, Paddy Barrett then saw a deflected effort from distance collected by Murphy before Dave Webster came across to put the buffers on Finn, who weaved his way past a couple of Rovers players.

Dundalk’s bright spell continued with Massey jinking his way into the Rovers box, only to see his attempted cross put behind by Blanchard but a lively first half ended with the sides deadlocked.

It took just 20 seconds of the second half for the deadlock to be broken. Brandon Miele left Chris Shields in his wake to latch onto Drennan’s brilliant pass and although Rogers did enough to block the shot, North was on hand to tap home the loose ball, sparking a mini pitch invasion by a minority of the home supporters.

Kenny turned to his bench with John Mountney and Ciaran Kilduff introduced for Horgan and McMillan respectively and the Lilywhites upped the tempo with O’Donnell coming within a whisker of getting his head to Finn’s deflected in the 63rd minute.

With Cork City being held in Drogheda, Dundalk supporters knew that a point could be enough and a golden opportunity to pull level arrived with 13 minutes left to play. O’Donnell, again, was the instigator, his lay off allowing Massey to drive a ball across the face of goal but Finn’s touch cleared the bar.

It looked like it was going to be a frustrating night for Dundalk but the crucial moment arrived in the 83rd minute.

Patrick Cregg collided into Meenan from Massey’s throw in, resulting in Padraig Sutton pointing to the spot.The decision looked harsh from a Rovers point of view and the protests were justified but when the fuss died down, Towell showed remarkable composure to send Murphy the wrong way from the spot, sending the Dundalk bench and their support crazy.

There was still time for some late drama with Simon Madden opting to stay on his feet after going past Massey in the penalty area. The Rovers player’s honesty probably costing his side a spot kick.

The full time whistle blew with attention turning to events at United Park in Drogheda and after an agonising wait, the celebrations began, Kenny’s brilliant side crowned worthy champions.

Speaking afterwards, Kenny hailed the performances of his players over the course of the season.

“It has been a tremendous effort by the players. It wasn’t our best performance by any stretch of the imagination but it’s over the course of a whole season and we were utterly dominant.

“We only lost one game and the players have been just relentless in their efforts and we won’t let up in any of the remaining league games and we’ll absolutely try and win every game.

The result secures Dundalk back to back titles for the first time in the club’s history.

“It’s great for the club,” added Kenny. “It was on its knees for seven years in the First Division and had they been relegated in the play-off in 2012, nobody would have really shed any tears but now the club are back-to-back champions, back in the Champions League qualifiers and it’s great testament to everybody involved.”