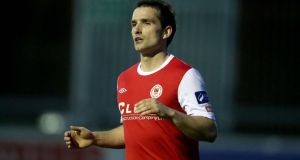 Christy Fagan returns to the St Patrick’s Athletic squad for the game against Dundalk at Richmond Park. Photo: Donall Farmer/Inpho

Two years ago Dundalk’s title challenge bit the dust at Richmond Park and last September another defeat there helped Cork City to push them all the way so the champions will know better than to take anything for granted as they head to Inchicore this evening.

St Patrick’s Athletic are 13 points behind their rivals going into the game and while top spot is probably already beyond them, Liam Buckley and his players could do with a big win to kick start what has been a difficult start to what looked only a few weeks ago like a promising campaign.

The hosts are boosted by the return to fitness of Christy Fagan and Greg Bolger but Ger O’Brien misses out again due to a persistent hamstring injury and that pressure to turn in a performance and take all three points may not help them against a side that is 24 games unbeaten in all competitions.

Kenny made 10 changes for the midweek EA Sports Cup game at the Mardyke and will most likely reverse all 10 this evening. Brian Gartland (hamstring) is the only certain absentee but Stephen O’Donnell (Achilles) is a doubt.

Events in Inchicore will be closely followed in Turner’s Cross where Cork City take on Shamrock Rovers.

“It’s going to be a very tight game,” says City manager John Caulfield. “They have played 13 games and only conceded two goals away from home, so that shows their intention to keep things very tight.

“They will feel that they can’t come to Cork and not get a result, but we are at home in front of our own supporters and we have a very good home record. We have scored 20 goals at home (in seven games), so I am hoping that we are going to be good enough to open them up and get the result.”

Alan Bennett is back in contention for the hosts but Danny Morrissey joins John Dunleavy and Kieran Djilali in the stands.

Galway have Marc Ludden, Jason Molloy, Alex Byrne and Conor Barry back in contention for the visit to Drogheda but Enda Curran remains a doubt while Kilian Cantwell and Sam Oji are still out.

David Cawley is suspended for Sligo Rovers as they head to the Brandywell in the hope of capitalising on Derry City’s hopeless home record.