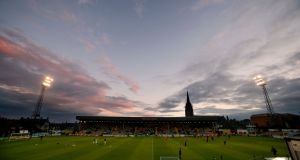 The complete demolition of Dalymount Park soccer stadium and its redevelopment in a simultaneous construction project with a new Phibsborough shopping centre, is being considered by Dublin City Council.

Two weeks ago the council revealed plans to redevelop the sports ground it bought last year from Bohemians football club for €3.8 million as a 10,000 capacity all-seater stadium on a phased basis over a number of years.

However councillors were told on Tuesday the council is to seek talks with the new owners of the neighbouring 1960s shopping centre with a view to pursuing the concurrent development of the two adjoining sites.

“It would be better if it could be done in conjunction with the shopping centre. If that doesn’t happen we will do it on a phased basis, but our opinion is that the stadium is no longer fit for purpose and our preferred option would be the complete demolition and rebuilding,” the council’s senior executive officer Jim Beggan said.

The phased development would take considerably longer, Mr Beggan said with construction unlikely to begin before 2018 or 2019 and taking several years to complete. Phased construction would also be more disruptive for local residents he said, whereas if the stadium and shopping centre were being demolished and re-built “in one go” the pitch could be used as a site area.

The shopping centre is in the control of Nama, which offered it for sale last year with a with a guide price of €15 million. Nama has chosen a preferred bidder but has yet to confirm the sale or the identity of the bidder. However it is likely the new owner will seek to immediately demolish and redevelop the old shopping centre.

The council is in discussions with Minister for Transport Paschal Donohoe to part fund the €20 million stadium development. Although a positive outcome is expected, there would be a “significant shortfall” in funding Mr Beggan said. If a deal could be done with the shopping centre owners, in relation to “land share or financial contribution”, this would help with the costs, he said.

While he did not know what the preferred bidders plans were, he said it was likely they would have a “very direct impact on the stadium”.

The new stadium is also likely to be used for events other than football matches, he said. “It would be our hope that the stadium would go some way towards paying for itself so we would be looking at other possible uses, which may or may not be concerts.”

During the boom, Bohemians had planned to sell Dalymount and move to a green-field site close to Dublin Airport. It was expected at the time that the shopping centre and the sports grounds would be combined to create a new mixed-use “village centre” for Phibsborough.

But the plan collapsed when the economy crashed and the club got into severe financial difficulties, with the purchase by the council last year helping to clear substantial liabilities which had been amassed.