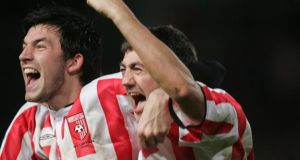 He curled the ball to the net off the upright, giving goalkeeper Ger Doherty no chance.

And Pat’s cruised forward attempting to build on that advantage with Daryl Kavanagh causing the home defence no shortage of problems.

The home side eventually settled and with Ruaidhri Higgins and Barry Molloy more prominent in the central midfield area during the latter stages of the first half, Pat’s found themselves on the defensive.

Retirement
The home cause was not helped with the retirement of Patrick McEleney after 42 minutes, the midfielder clearly in trouble following a tackle.

Derry could have equalised in the 58th minute when substitute Paddy Kavanagh burst clear on the right but the experienced Pat’s defender Kenny Browne was alert to the danger and made a timely tackle.

The introduction of young Ryan Curran had sparked life into the Derry front line and the home side continued to surge forward in the second half. Barry Molloy lashed a shot over the crossbar in the 79th minute.