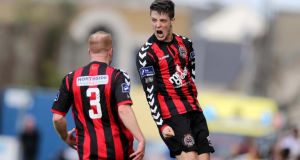 Far from the clinical demolition executed by the champions earlier against Bray, Cork laboured at Dalymount Park after going ahead with just two minutes on the clock and were eventually pegged back by their hosts six minutes from full-time.

Substitute Adam Evans volleyed home the equaliser for the Gypsies, cancelling out City’s opener which had arrived through veteran Mark O’Sullivan’s first league goal of the campaign.

This set-back, coming on the back of defeat to Dundalk last week, leaves Cork with significant ground to make up in the final two thirds of the season if they are to dethrone to Stephen Kenny’s runaway leaders.

“At the moment, they seem untouchable,” was the honest assessment of Cork manager John Caulfield afterwards on Dundalk.

Bohemians, meanwhile, can reflect favourably on their first series of fixtures, albeit they drop a place to fifth as both Shamrock Rovers and St Patrick’s Athletic bettered their result over the weekend.

O’Sullivan, preferred by Caulfield ahead of John O’Flynn in attack, vindicated his manager’s gamble in the first action of the tie.

When Liam Miller broke from midfield at pace, he picked out the 32-year-old Derek Pender raiding in from the left and his rising shot beat Dean Delany.

Bohemians, without their talisman Dean Kelly in attack, were restricted to half-chances before the break in their quest to mount a comeback.

The closest they came to equalising was through Lorcan Fitzgerald’s lofted free-kick which goalkeeper Mark McNulty tipped over the crossbar.

Indeed, the Rebels should have extended their lead on the hour when the ball dropped kindly to Garry Buckley on the edge of the box from Billy Dennehy’s cross, yet he couldn’t keep the volley down.

Roared on by their home crowd, and with substitute Jason Byrne causing the Cork defence problems, Bohs pressed for a leveller in the final 10 minutes.

Mark Griffin gave Cork a scare nine minutes from time with a shot that McNulty parried away but the City stopper was helpless to prevent Evans spearing his volley to the top corner after John Kavanagh’s attempted clearance fell into his path.

“It was a great goal, to be fair,” admitted Bohemians manager Keith Long.

“I thought we deserved the equaliser. There’s a bit of a gap between us and some of the full-time teams but what we lack in quality we make up in honesty of effort and I thought we had that in abundance today.”