Mourinho defends his record in Spain

Manager blames the media and club captain Casillas for his disenchantment 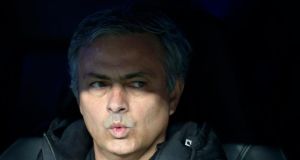 Real Madrid coach Jose Mourinho says he has yet to decide on his future. Photograph: Sergio Perez/Reuters

Jose Mourinho claimed he has not yet made a decision on his future but did so during a press conference performance that felt like a farewell and a settling of scores.

At one point he pulled out a piece of paper and reeled off a list of former Real Madrid managers whose achievements, or lack of them, put his record into perspective.

He also pointed the finger of blame for his impending exit at two principal targets: the media and the club captain Iker Casillas, with whom his relationship has broken down.

Although Mourinho has not finalised a deal with Chelsea, he is preparing the ground for his arrival at Stamford Bridge and here he continued to stoke up talk of his departure from the Bernabeu.

He insisted his sacking from Chelsea in 2007 was not as “controversial” as is assumed and launched an aggressive defence of his achievements at Madrid, claiming the credit for ending Barcelona’s “hegemony”.

First person
Asked if he had taken a decision, Mourinho replied: “No, no. The first person I tell will be my wife and children. At the end of the season I will speak to the president, Florentino Perez, and [director general] Jose Angel (Sanchez) and decide.”

He added: “I have always left clubs in the right way. Even Chelsea, which seemed controversial, wasn’t so much. When I go I never say anything negative about those clubs, quite the opposite. The day I go I will be wishing Madrid the best for the future.”

At best, Mourinho’s three-year spell at Madrid will end with one league title, in which his side reached a record 100 points, and two Copa del Rey successes, plus three Champions League semi-final appearances. Madrid trail Barcelona by 11 points in the league. For some, that is a modest record for a club such as Real, a manager such as Mourinho and a squad that is the most expensive in the game’s history.

But the Portuguese was quick to portray his record in far more positive terms.

“It is my fault: I have won so, so, so much it is hard to live up to those expectations. But the points record in the league is mine and no one can take that away,” he said, unfolding a piece of paper and reading a list of former managers.

The manager accused Casillas of cultivating a relationship with the media and the media of championing the goalkeeper’s cause. “My players like to be treated the same way . . The problem happens when someone thinks he is above the rest,” he added.