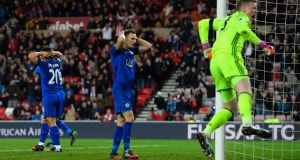 If ever there was an example to give to the sponsored souls who believe the game somehow entered a new realm in 1992, and all previous drama was deemed irrelevant, it is the last day of the old Division One season in 1938.

No fewer than eight clubs went into the last day of season 1937/’38 with the mathematical possibility of relegation. At a time of two points for a win, two points separated Everton in 15th from Grimsby Town in 22nd. It was the era when only two clubs went down.

Two of them, Huddersfield Town and Manchester City, met at Leeds Road that Saturday afternoon. They were 16th and 17th respectively at kick-off and the lower of the two, City, had five clubs below them. On paper City looked pretty safe. Besides, they were the reigning champions of England, they could hardly be relegated. That had never happened before.

Huddersfield won 1-0. The goal was scored with around 15 minutes left and while City piled forward, they could not find an equaliser.

But as they left the pitch, neither the players nor the crowd knew the results from elsewhere. City could have been safe.

On reaching the dressing room, a club director added to the suspense. “Well, lads,” he said, “we don’t know our fate yet, but we soon will.”

It was a different era in terms of communication too.

The director was right, of course. Minutes later he returned to say: “We’re down.”

And so the champions of England in May 1937 were relegated in May 1938. It was an historic feat, it remains so.

This brings us, fast forward, to Leicester City. As unlikely as it sounds, Leicester City can follow winning the Premier League in May 2016 by being relegated in May 2017. Anyone at Leicester feeling complacent about this need look no further than the club they host today – Manchester City.

The sky-blue City offer the example and reminder to the deep-blue City of what can go wrong, even when you are champions laden with individual talents.

The reason we know what was said in the Man City dressingroom at Huddersfield on May 7th, 1938, is because one of those exceptional talents, Peter Doherty, wrote about it a decade later.

Doherty, said by those who saw him to be the greatest Irish footballer ever, was, along with Frank Swift, Freddie Tilson, Alec Herd and Eric Brook, an essential part of the City team which took the league title to Maine Road – for the first time – in 1937.

Signed from Blackpool for just short of the British record transfer fee in February 1936, Doherty made his debut at Preston. He was marked by Bill Shankly, of whom Doherty said: “He dogged my footsteps all afternoon, muttering: ‘Great wee team, North End, great wee team.’”

Also on the pitch at Deepdale that day was Matt Busby. Doherty’s first appearance for Manchester City was Busby’s last – Busby had been at the club six years and was off to Liverpool.

A mid-season arrival meant that 1936/’37 was Doherty’s first full one at City. He scored 30 goals in the league and two in the FA Cup. He added speed, skill and a cutting edge to a team that had finished in the top five twice in the previous three seasons but which couldn’t quite get to the top.

With Doherty, City did get there. Managed by Wilf Wild, City ran wild. They scored 107 goals in their 42 league games.

Yet after Christmas Day, when they were beaten 5-2 at Grimsby, City were as low as 18th in the division.

There were 22 games left, City did not lose one. Wilf Wild’s men found the sort of form that carried them clear of Charlton Athletic and Arsenal by the penultimate weekend. Doherty hailed a series of players for “many dazzling, bewildering displays”.

But Doherty also said: “Team spirit, I maintain, is the greatest single factor in winning such an exacting and exhaustive competition . . . it is a mysterious and elusive thing.”

Just a few months later, Doherty was proved correct. Whatever City had, it now eluded them. Doherty mentioned “a crop of injuries” and “any amount of bad luck”. He also referred to “scrappy, indifferent displays”.

After losing 2-1 at relegation-threatened Sunderland last Saturday, Leicester’s captain Wes Morgan spoke of the team being “in a rut”. This was a third league loss in the last four games, they have conceded 24 goals in the opening 14 matches. In the final 14 of last season, the figure was 10.

That’s major change. When Leicester won five in a row during March and April, they did not concede one goal. N’Golo Kanté and Danny Drinkwater played in all five at central midfield. Last Saturday it was Andy King and Daniel Amartey.

At the risk of contradicting Doherty, this is a specific difference, there is nothing mysterious. Danny Simpson also referred to the change in referees’ direction when viewing tussling at free-kicks and corners. This has affected a combative defender such as Robert Huth.

Then there’s Jamie Vardy: last season he had 14 goals at this stage, now it’s two.

The consequence is that after 14 games Leicester have 13 points. They are on course to finish the season with 34-36 points. Only once in the past six seasons has 35 points been enough to guarantee safety.

Having said this, relegation and Leicester still feels like a long, long longshot. They have had an alternative focus, the Champions League, and have been excellent in it – at least until Wednesday at Porto when Claudio Ranieri rested players.

And once that experience ends, Leicester will be expected to kickstart their league form. We shall see. Before then it’s Bournemouth and Stoke away next week.

Manchester City kept waiting for their form to turn in 1938 but it didn’t and they went down. Expectation then decreed City would go straight back up, but that didn’t happen either.

Suddenly a second Second Division season was upon Maine Road and they would try again. But as Doherty put it, “we reckoned without Hitler”.

The second World War intervened and it was not until promotion in 1947 that Manchester City recovered from the fall of 1938. By then Busby was manager of Manchester United and Liverpool had signed a full-back called Bob Paisley. Time gallops.

Manchester City 1938? It’s not quite “a warning from history” for Leicester, but it’s a nudge.

1 Nicholas Quinn: ‘Swimming became how I dealt with grief’
2 Ian McKinley: ‘You do take for granted the simple things in life’
3 Reality Bites – Tales from the new normal: Caitríona Cormican
4 James McClean still failing to learn his own online history lesson
5 Matt Williams: We all need a bit of Bud Maher’s resilience right now
Real news has value SUBSCRIBE
Crossword Get access to over 6,000 interactive crosswords