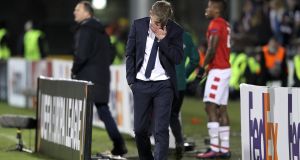 Stephen Kenny looked like a man who had just checked into the Heartbreak Hotel. Late Thursday, Tallaght Stadium, and Kenny had his back to a wall as he answered questions about a rare flat night for Dundalk. The manager was crestfallen.

Kenny was subdued, eyes down, disappointed with how his team had played against AZ Alkmaar.

Everyone was. This had the feel of a 1-0 defeat from the ninth minute, when Alkmaar scored. Dundalk tried repeatedly to get themselves going but there was a connection missing. It can happen.

It makes reaching the last 32 of the Europa League troublesome and dependent on others. A trip to Maccabi Tel Aviv in a fortnight will determine Dundalk’s immediate European future. Kenny spoke of “fear” and how it can “overwhelm” you.

But that was at the beginning of a mini de-brief. By its end he was reminding people, quietly, that over the past three seasons Dundalk have scored at every foreign ground they’ve visited – in Luxembourg, Croatia, Belarus, Iceland, Holland and Russia.

“Now we’ve got to go to Israel now and score,” Kenny said. “Having seen the team perform regularly, would you bet against us? We are capable of those performances. We’ve had results away from home.”

In black and white that may come across as defiance, but it wasn’t said that way. Kenny was pointing out facts. Overall his tone was that of a beaten manager, drained.

What Kenny could have also mentioned were the two and a half weeks between Dundalk’s last game and Thursday and the effect of that gap on matchday rhythms, he could have noted that captain Stephen O’Donnell limped off after 42 minutes. Explanations, not excuses.

Of course, Dundalk have beaten BATE Borisov and Maccabi Tel Aviv in Tallaght in the past four months, so it would be hard to argue that the venue was the major factor on Thursday night. But it would be obtuse to ignore it. Tottenham Hotspur and Wembley this season spring to mind.

When a team cannot spark itself, sometimes it comes from the crowd, the atmosphere. Tallaght Stadium has obvious qualities but being Dundalk’s home is not one of them.

If you’ve ever been to Elland Road on an angry night, you’ll know the effect a crowd can have. It can feel like they’re on the pitch. Even at a small, old ground like Hartlepool United’s I’ve witnessed the crowd help transform the outcome of a match.

Their story has been told and re-told over the past few months and in the re-telling the extraordinary can be made to seem ordinary. What Dundalk FC, Kenny and his players have done is far from ordinary.

If we are honest, Alkmaar 2016 are hardly Ajax 1972 but the Dutch club start the annual Europa League physically, mentally and financially much further up the grid than Dundalk, who as a club were down the road asking directions for the track.

Not any more. Dundalk have established themselves in the head of European clubs, and wait til they play at home.

Arguably the biggest result of Dundalk’s week was announced on Monday. This was the re-taking ownership of Oriel Park.

Speaking to general manager Martin Connolly afterwards, he stressed just what a distraction this had been – for the club and its hardcore support. What the €7 million generated by this enriching European run has given Dundalk’s future are, Connolly said, “options”.

Around €500,000 has been used to settle the Oriel Park issue and now, as Connolly said, it’s question time: “Do you continue to function as a League of Ireland club with three full-time staff?” he said. “Do you develop the stadium? Or do you move to a green field site? We might look at a move away.”

There will certainly be a new pitch because, move or no move, Oriel Park will be home for at least another four years. However, it will not match Uefa’s Category 4 criteria by next season, so they’ll be back in Dublin for Europe.

An additional downside of that is Dundalk as a town – hotels, pubs, taxis etc – does not feel the benefit of, for example, Dutch fans’ wallets. But if they maintain their progress, they will.

The control Kenny’s players reveal on the pitch, as seen in their refusal to lump it in the last few minutes on Thursday, is matched now in their administration. A club such as AZ Alkmaar takes this for granted.

That’s not been Dundalk’s modern history, but they have provided themselves with a measure of independence. Kenny can reproach himself for one off-night but it should be short-lived.

He lamented qualification for the last 32 is no longer “in our own hands”, but that’s not the big picture. Dundalk are an example to Irish football, deserving of nothing but praise. Self-determination is a real achievement.

As mentioned above, Tottenham’s European troubles this season, which saw them eliminated from the Champions League on Tuesday in Monaco, stemmed in part from playing home games at Wembley rather than White Hart Lane.

It’s hard to quantify the effects of losing 5-1 to relegated Newcastle on the final day, but Mauricio Pochettino was plainly embarrassed that afternoon.

Spurs then invested a staggering €35 million on a Newcastle player, the most average and indifferent Moussa Sissoko. They bought Vincent Janssen, too, from AZ Alkmaar. For €20 million.

And Tottenham have won one game in their last nine. That was last Saturday’s snatched 90th minute victory over West Ham.

It was unconvincing and now they go to Chelsea, who have won their last six league games with a goal tally of 17-0. It does not look as though Spurs’ difficulties are about to ease.

1 Reality Bites – Tales from the new normal: Caitríona Cormican
2 Nicholas Quinn: ‘Swimming became how I dealt with grief’
3 James McClean still failing to learn his own online history lesson
4 Ian McKinley: ‘You do take for granted the simple things in life’
5 A beautiful, happy accident - Moneyball is the best sports movie ever
Real news has value SUBSCRIBE
Crossword Get access to over 6,000 interactive crosswords