‘Every minute of these matches will be very, very important for us,” says Republic of Ireland boss 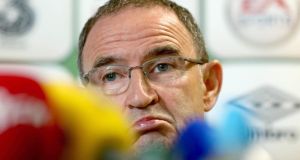 Republic of Ireland manager Martin O’Neill: “You have to remember what the object is, which is to try and break in and score some goals.” Photo: Donall Farmer/Inpho

As a journalist you often find yourself standing in a group with other journalists, taking turns to ask questions of a football manager. Martin O’Neill’s behaviour in this situation is quite different from most managers in that, a lot of the time, he doesn’t bother making eye contact. If you ask him a question, O’Neill typically inclines his head in your direction and seems to contemplate the floor as he delivers his answer.

Maybe he finds it easier to compose his thoughts without the distraction of having to stare back at people. Or maybe he is just slightly bored, because you notice that when he gets onto a subject that interests him, he starts to look up.

O’Neill had been speaking for several minutes after the match on Wednesday night before he finally hit on such a theme: how he felt about the return of competitive football after a 10-month phoney war of friendly matches.

“This is it. This is competitive football. Every game, every minute of these matches will be very very important for us,” he said.

Twelve hours later in Malahide, Roy Keane would echo that message almost word-for-word. “Every minute of every game will be vital,” he said. “There’ll be vital moments, starting with Sunday we need to be ready. It’s a difficult start, but we’re ready for it. That’s why you play the game. Nothing to be frightened of. We’ll be ready to go, trust me.”

Maybe “every minute of every game” is the new “little details”. Giovanni Trapattoni repeated that mantra nearly every time he spoke, and if the message seemed to have lost its impact by the time of that last, inept qualification campaign, it did at least appear to have a bracing effect when he initially took over.

With the composition of the squad having changed little since the end of the last qualifiers, it’s up to the Irish players to find reserves of strength that were not in evidence last time. O’Neill insisted on Wednesday that those reserves are there, even if the players don’t realise it yet.

The 90 minutes against Oman had been tidy but a little tame for the manager’s liking. On the plus side, the team kept a clean sheet, although Shay Given might for once have appreciated if the opposition had at least given him the chance to let one in.

Oman’s inability to threaten his goal meant Given had no opportunity to show that he remains as sharp as ever despite playing no competitive football in six months. In the event, the 14,376 crowd departed safe in the knowledge that Given can still stand, point, shout, and take goal kicks.

O’Neill and Given both say there have been no promises or demands regarding Given’s place in the starting XI, and while O’Neill will not confirm his decision until Sunday, his words after the Oman game suggested he might be leaning towards sticking with David Forde for now.

The manager praised Given’s attitude, his training ground influence and his “fantastic ability,” but added “I think he’s got, I think he would say himself, a bit of work to do. What happens is that if you’re not playing competitive football week in, week out, you definitely lose a little bit, even if that’s flexibility, that type of stuff.”

The Forde-Given dilemma at least has the benefit of being a simple either-or question. The other end of the field presents a more complex quandary.

The most obvious change O’Neill has made since taking over is that Wes Hoolahan has become a regular, playing in all eight matches, of which he has started six. After years of getting overrun by opponents who outnumbered them in the centre, Ireland finally have a third man to link midfield and attack. Hoolahan’s quick brain and quick feet have made the team both more creative and more solid.

The cost of adding a player to midfield is that you have to subtract one from elsewhere. Hoolahan’s inclusion has meant that Ireland have usually started with only one striker. This was the case against Oman, when Doyle started up front, but O’Neill agreed afterwards that the team had looked more threatening after Robbie Keane and Shane Long were introduced along with Aiden McGeady on the hour mark.

“What happened sometimes is that we pass the ball, pass and pass and pass and it’s nice and we’re fine, but we’re passing for the sake of passing it,” he said. “You have to remember what the object is, which is to try and break in and score some goals. And I thought we lost our way a little bit. But the impetus of what you call, some senior players coming into the squad, I thought revitalised us for that last half hour.”

Long and Keane have been on the field together for just 72 minutes since O’Neill took over. They have not started together - although they have twice come on together as substitutes - and Long has not started when Keane has been available.

Without Long, Ireland lack pace and energy; without Hoolahan, the midfield doesn’t work as well, and Keane is the highest goalscorer currently active in international football: it’s hard to imagine him being left out. But they can’t all play in the system Ireland have been using without one or two of them playing out of position.

There is another way to get the three on the field in their best positions, and that is to play 3-5-2. O’Neill had planned to try a three-man defence against Oman, but he wanted the security of a two-goal lead before making the switch. The second goal came on 81 minutes, so there wasn’t enough time left to get a real sense of the alternative system.

The manager knows 3-5-2 well, having used it at Leicester City and Celtic, but most of his players don’t have the same familiarity with it. “You have to have your three back players right in unison,” O’Neill said. “Holland practiced it two or three times before the World Cup. You would have to practice it, and practice it properly. It’s just, if we have to do it… at least it’s not completely foreign to them.”

He mentioned Matt Elliott, the big central defender who was also one of his Leicester side’s most dangerous attackers. Elliott liked three at the back because “it hid any little deficiencies that he had, in terms of real pace, but it meant that he could come out with the ball and do things. A wee bit like I tried to encourage Richard Keogh tonight - to drive forward with the ball. I know he’s a centre half, and he’s going to go a certain distance, and centre halves generally get worried the minute they step into the opposition half. But go on - be confident, be comfortable with doing that.”

O’Neill talks about “confidence”, “drive” and “ambition” a lot more than he does about “tactics” or “philosophy”. This comes across less as a lack of interest in the tactical side of the game, and more an impatience with the sort of managers who talk about it all the time. He had been talking rather animatedly about 3-5-2 for a couple of minutes when he seemed to remember himself. “Eventually lads, don’t absolutely confound yourself with it, you know? Honestly. It’s about players. It’s about players. I’m only talking about it because you see other managers talking about it, I really, I think to myself... and they’re blinding people with it.” A pause. “And they don’t know what they’re talking about.”

1 Robbie Henshaw likely to be the only Irish change for France finale
2 Seán O’Brien: Anger over my parents’ break-up never left me
3 Cian Healy: ‘Realistically I got away with murder when I was younger’
4 Bartomeu resigns and drops bombshell of Barcelona joining European Super League
5 Ireland's centre will hold thanks to Henshaw and Aki’s midfield muscle memory
Real news has value SUBSCRIBE
Crossword Get access to over 6,000 interactive crosswords