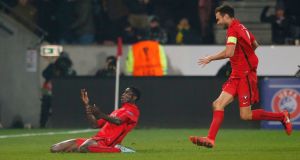 At the final whistle a stony-faced Ed Woodward, the executive vice-chairman, left his seat in the cold surely wondering when – if ever – this side built with a £250 million-plus spend by Van Gaal is going to show a consistent improvement in performance and results.

For United to lose this Europa League last-32 opening leg to the Danish champions who last played competitively on December 10th (because of the winter break) is a major embarrassment, and should again start an inquiry into Van Gaal’s tenure as manager.

Onuachu, a 21-year-old Nigerian whose Wikipedia page ran to just a single sentence before his winning strike, will long remember the way he shrugged off the below-par Juan Mata to beat Sergio Romero, who had been United’s one shining light.

United’s hopes of winning this competition and so claiming a coveted Champions League place had been given another body blow when David de Gea went down in the warm-up. The goalkeeper left the session limping and was replaced by Romero, whose last start was in late October in a Capital One Cup tie. De Gea’s problem followed the knee injury suffered by Wayne Rooney at Sunderland and so he became the 12th leading player unavailable to Van Gaal.

The manager’s paper-thin resources were illustrated by the 21-year-old Donald Love being given a senior debut at right back in a team that, with De Gea’s late pullout, featured five changes from the XI on Saturday.

Early on, Romero was required to ensure the home team did not take the lead. Daley Blind allowed a corner from the right to find Kian Hansen too easily and a sharp header was saved well to the keeper’s left.

One of the changes from the Stadium of Light was Depay. Until this start the Dutchman could be billed as an eternal substitute, having gone 11 matches in the role since last featuring in the first team on St Stephen’s Day, when United were dismal in a 2-0 defeat at Stoke City.

Here at last was a chance to impress. One instant control and pass from Depay’s half into Midtjylland’s half and into the onrushing Jesse Lingard’s path impressed. While Lingard’s touch failed to take him clear, when the same player created an opening for Depay his initial contact also failed him, the ball rolled wide, and his shot was blocked for a corner.

United were to take the lead via Depay on 37 minutes but just before they suffered an almighty scare. In a move more likely to be witnessed at a Sunday league parks game a Midtjylland clearance removed Michael Carrick and Paddy McNair and bounced into Vaclav Kadlec’s path while the forward was still in his half. From here the No 14 raced 40 yards with a flailing Carrick unable to catch up and when Kadlec let go the attempt Romero again saved well.

Instantly, United made Jess Thorup’s team pay with Depay’s sixth strike of the season. This was simple stuff as Lingard popped over the ball from the right and after another clumsy touch this time the Dutchman recovered well to finish past Mikkel Andersen, who got a hand on the ball and should have done better.

This was the moment for United to close off the contest until the break. Yet with moments to go they allowed the equaliser. Carrick lost the ball, Pione Sisto surged forward, cut across Ander Herrera, and fired home beyond Romero.

This inability to kill off a contest is a weakness identified last season by the manager and given he has not remedied this it is a telling indicator of the stagnation that has ensued.

It is also a reason – though not the prevailing one – the £71 ticket price levied on fans to watch this game was met by disgust by the travelling contingent. The main factor is a feeling of exploitation, of course, and the planned protest by the United faithful could be found before kick-off in Herning town centre where a large “Scamdinavia” banner was displayed and later brought into the ground.

To lighten this mood United really needed to finish the second half having won this leg. Anthony Martial, operating as the No 9 in Rooney’s absence, set up the opening chance, gliding infield and laying the ball to Lingard but the shot lacked composure.

Lingard was to crash the ball back off the bar unluckily before Romero made his third – and best – save of the night.

Onuachu had been in the contest only a few moments when his header appeared goalbound but the Argentinian stuck out a glove and it remained 1-1. The same player, though, was about to make his mark.

1 Ireland to stick with winning formula against England
2 Wales cry foul over Furlong’s scrum technique
3 Should fans be allowed drink in the stand at sporting events?
4 Brian O’Driscoll accuses England boss Eddie Jones of ‘scaremongering’
5 No happy returns as Atlético hold Liverpool at bay in Madrid
Real news has value SUBSCRIBE
Crossword Get access to over 6,000 interactive crosswords