Leicester continue to cast their spell in drive towards league title 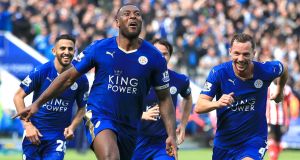 Leicester City’s Wes Morgan celebrates scoring what turned out to be the winning goal against Southampton at the King Power Stadium. Photograph: Nick Potts/PA Wire.

Claudio Ranieri has praised his Leicester City players for their response under pressure as they established a seven-point lead at the top of the Premier League with victory over Southampton and moved another step towards realising a first top-flight title after a “magical” season.

Leicester capitalised on Tottenham dropping two points at Anfield on Saturday with their fifth 1-0 victory in six unbeaten games to deflate the chasing pack. Rather than being a squad gripped by nerves over the run-in, the home players had welcomed the club’s chairman, Vichai Srivaddhanaprabha, into their dressing-room pre-match and serenaded him with “Happy Birthday”, offering an indication of their relaxed mindset.

While this was an occasionally edgy victory, with Southampton bemoaning the non-award of two penalties, Ranieri recognised the significance of a win secured by Wes Morgan’s first goal in 11 months.

“It was important because it was a good answer to the Premier League,” he said. “Everyone was waiting for us after the draw between Liverpool and Tottenham, and we gave a very good answer. Am I nervous? No, no, no, no. I’m very calm. We believe in what we are doing. We believe it’s a magical season. We believe next season it will not be the same, so we try to do our best.

“Bigger teams, better teams, can win 3-0 or 4-0. We have to fight to win 1-0. But, for this reason, we are focused on doing things our way. Look, we are very close to achieving Champions League [qualification]. That’s it. Another two or three weeks, we’ll be in the Champions League for sure. But whether the gap to second is six, five, one or seven points is not important. What is important is how we react, how we play. That’s what I want from them. When they give me everything, their heart and soul, I’m happy.”

His opposite number, Ronald Koeman, said Leicester had been fortunate to escape conceding a penalty when Sadio Mane rounded Kasper Schmeichel and saw his goal-bound shot blocked by Danny Simpson’s right elbow, albeit held tight to his side. He pointed, too, to Robert Huth escaping when he handled Charlie Austin’s late cross.

Ranieri didn’t agree and was pleased to provide Srivaddhanaprabha, who departed for Thailand post-match, with some cheer on the eve of his birthday.

“We have another clean sheet, another win, so I’m happy and the chairman is happy,” he added. “I’d asked the players to give him a good present, and they did.” Guardian Service

Chelsea condemn Liverpool to latest defeat; Gordon Elliott hearing to begin 07:37
Walk tall, golfers, and tell Leo that golf is not the enemy at the gate 06:35
Mick’s millennium: McCarthy clocks up his 1,000th game as manager 06:00
The interpros give players a chance to prove the coaches wrong 07:09
Pro14: Munster-Connacht rivalry set to take on a sharper edge 06:00