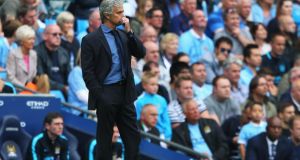 Chelsea manager José Mourinho told press conference after Sunday’s 3-0 defeat the result was “fake”, the goals “out of context”, and taking off John Terry at half-time “just a decision”. Photograh: Alex Livesey/Getty Images

José Mourinho’s post-match remarks were delivered in a detached disbelieving tone that made it sound as though he regarded Chelsea’s 3-0 defeat to Manchester City as a sort of logical absurdity. The result was “fake”, the goals were “out of context”, and taking off John Terry at half-time was “just a decision”.

The Chelsea manager explained it was half time, and Manchester City were ahead 1-0, so Chelsea needed to take the initiative and push forward for an equaliser. But that risked leaving Terry one-on-one against Sergio Agüero. And with Agüero being so swift and sharp, and Terry being so old and slow, that was an unacceptable risk.

So Kurt Zouma, the fastest young central defender in the squad, would replace the 35-year old Terry for the second half.

The benefits of the switch were not immediately apparent, as the Chelsea team that had conceded one goal in the first half went on to concede two more in the second. But that did not prevent Mourinho from praising his own decision.

“I think I was proven right, because we controlled the depth of the game and the counter-attack,” he told Sky Sports. Well, if you say so José . . .

Mourinho continued with this justification in his post-match press conference, at least to begin with. “In the second half, everything changed. We brought our defensive line to the midfield line. We pressed them, we created chances . . . They could not cope.”

The problem with Mourinho’s argument was that Chelsea’s defensive line had not really pushed forward very much at all. Opta match data showed that Kurt Zouma’s average position throughout the second half was only two or three metres further forward than Terry’s in the first. A negligible difference, considering that City were sitting on a one-goal lead.

But it’s not as though anyone believed the excuse in the first place. Everyone knows Terry does not get substituted at half-time for abstruse tactical reasons.

The truth is that Mourinho had never recovered from the shock of seeing Sergio Agüero burst through his defensive line and go one-on-one with Asmir Begovic inside the first 30 seconds of the match.

“When the game started and 10 seconds later you have Agüero behind the defensive line and facing Begovic, you get immediately the notion the start was not good,” he said.

A few seconds later he returned without prompting to that incident: “Today I was the first one to be disappointed when you are all week speaking about movements and Agüero runs and Agüero positions and wingers coming from outside to inside, and after 10 seconds Agüero is in the face of Begovic.”

Mourinho ensured nobody forgot Terry had been the Chelsea defender chiefly responsible for that scare. He had left Agüero too much space to turn in midfield and could not close the gap as the Argentine striker ran through onto David Silva’s pass.

Maybe the manner in which he had let Agüero give him the slip was preying on Terry’s mind when he left his central defensive zone to chase Silva upfield, and therefore found himself out of position for City’s first goal.

Whatever was going through Terry’s head, Mourinho had seen enough. The captain was reduced to watching the second half with the cold, murderous stare familiar from the Andre Villas-Boas and Rafael Benitez years. Both those managers wanted Terry out, but neither was politically powerful enough to dislodge him.

Mourinho sympathised with Terry, but even as he professed his continuing faith in the ageing central defender, it was possible to detect a note of menace.

He reminded everyone he was the one who had made Terry captain and played him in every game.

He pointed out that while he had never previously substituted Terry, other managers hadn’t even selected him. He noted that “the armband is just the armband”.

Maybe it’s all just another of Mourinho’s patented ploys of misdirection. If everyone is talking about Terry, then nobody will talk about the fact that Chelsea are winless after three matches, that Cesc Fabregas looks as tired after his holiday as he did before it, that Branislav Ivanovic seems to have aged 10 years over the summer, that Mourinho has lost his unbeaten records against Arsène Wenger and Manuel Pellegrini, and so on.

In both cases the “distraction” theory makes no sense, because the cure is worse than the disease. A week of non-stop speculation about a possible rift between Mourinho and Terry will be more wearing for everyone at Chelsea than would be a week of pundits pointing out that they have lost a few early points in the title race.

The episode is most interesting for the insight it gives into Mourinho’s merciless mentality. Terry was the outstanding Chelsea player during the title run-in last spring, delivering a series of near-flawless defensive performances.

Here we are, still in the first month of the new season, and Terry is hooked and humiliated at half-time for the first time ever. When you work for Mourinho you pay for your mistakes, and you don’t get to keep any credit in the bank.