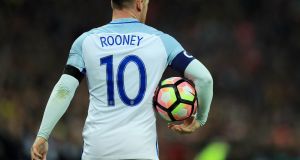 Wayne Rooney: turned into a national laughing stock simply for doing what millions of others do every weekend. Photograph: Richard Heathcote/Getty

Last Tuesday the Sun printed a photo of Wayne Rooney drunk at a wedding to which he had not been invited. Wednesday brought more pictures and further detail, including the story of how Rooney had tried to play the piano but “hit a bum note as he simply ‘mashed’ the keys at the posh bash”.

Later on Wednesday, Rooney announced, through a spokesman, that he had spoken to the England management “to unreservedly apologise. He would like to further extend that apology to any young fans who have seen these pictures.”

But by Saturday Rooney had decided that he didn’t feel like apologising after all.

“I’m proud to play for my country and I’m proud of my achievements,” Rooney said after Manchester United drew 1-1 with Arsenal. “It’s not finished yet. I think what’s been going on is disgraceful. It shows a lack of respect. I think enough is enough.”

Some detected in Rooney’s peevish tone the tell-tale irritation of the drinker who wants to blame everyone but himself for something that he knows deep down is his own fault.

But it’s also possible that Rooney is righteously disgusted at the hypocrisy he sees all around him.

The Sun’s investigation of the deep motivation behind Rooney’s drinking threw up this gem, attributed to an unnamed football agent: “Wayne’s always liked a drink. That’s the culture and type of Irish-origin family he comes from.”

We’ve all felt the warm glow that comes with ascribing to the Other the faults you are ashamed of in yourself. As anyone who has spent time in Ireland and the UK knows, social life in both countries revolves around drinking.

So it’s easy to see why Rooney might feel it’s unfair that he gets turned into a national laughing stock simply for doing what millions of others do every weekend.

It’s also easy to make the counterargument that unlike most of us drinkers, Rooney is supposed to be a professional athlete. He gets paid millions of pounds to play football at the highest level. It’s his professional duty to ensure that he is in the right physical condition to perform. Drinking until 5am is plainly not a good way for a serious sportsman to behave. Rooney has abdicated his responsibilities and deserves all the criticism he gets.

Implicit in this argument is the puritan notion that the first duty of every individual is to their calling. What used to be called the Protestant work ethic springs from the idea that each of us is the bearer of certain God-given gifts, and that it is our sacred mission to honour them. Any indulgence that prevents you from making the most of these gifts – like, say, staying out drinking until 5am when you are meant to be a super-fit footballer – is therefore a sin.

The religious zeal that inspired that pattern of thinking has mostly evaporated, but the deep grooves it wore into the culture remain. Nobody calls it the Protestant ethic any more, it’s simply the work ethic, and the intrinsic nobility of “hard work” is seldom openly questioned, even though in the modern economy the link between work and reward is somewhere between tenuous and mythical.

Alex Ferguson, for instance, never spoke in public about religion, but in his attitude to work he was a Calvinist to the bone. Nothing angered him more than players who were too fond of drink, or sex, or fame, or anything else that he considered irrelevant to their calling in life, which was to be the best footballer they could be and nothing more.

This is why Rooney is currently in the stocks: he has insulted the holy ideal of hard work that is a central ideological plank of our culture. And the rest of us can fling some rotten fruit and then carry on with our lives, as though we really believed that alcohol was harmful only to professional athletes.

We should think hard about that response, because if Wayne Rooney is guilty of selling himself short, then so too is every one of us who drinks. Our personal potential might not be anything like as great as Rooney’s once was, but no matter what the notional limits of your capacity, deciding to drink means you’re settling for less.

Alcohol is poisonous to the body, which is why athletes are told to drink as little as possible. Most of us don’t need to be fit enough to run 11km, like a professional footballer. An athlete who makes it more difficult for themselves by drinking too much seems like an obviously idiotic figure.

But alcohol is also poisonous to the mind. It leaves you anxious and depressed, sluggish and irritable, it reduces your capacity to think and to feel. It’s striking how easy non-athletes find it to forgive themselves for stumbling through life in a stupefied state.

Think of that picture of Rooney at the wedding, with his drooping eyes and wine-stained lips. Any of us who drinks can think of a few pictures of us looking a bit like that. If we got to thinking about what it meant, we might start to feel bad.

Better to point and laugh at Irish Wayne, and reassure ourselves that at least we’re better than him. And maybe have another drink, because at least we know that when we do it, nobody takes any notice.

1 Next stop the Champs-Elysées in green for Sam Bennett
2 Born to ride, born to win: Sam Bennett, the making of a green machine
3 Let’s face it, Saracens don’t really care that they are rugby’s most hated team
4 Donegal footballer tests positive for Covid-19 forcing squad into isolation
5 Leinster look ready to step things up and burn off Saracens challenge
Real news has value SUBSCRIBE
Crossword Get access to over 6,000 interactive crosswords