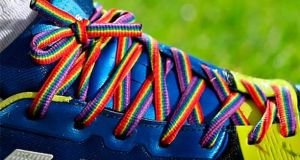 Rainbow flags were carried out at every Premier League match this weekend, the team captains wore rainbow armbands, and the referees wore rainbow laces

Over the weekend all Premier League clubs participated in the Rainbow Laces campaign, an anti-homophobia initiative organised by the LGBT rights charity Stonewall.

“The Premier League is all about exciting, passionate and unpredictable football that is for everyone, everywhere,” said the league’s chief executive, Richard Scudamore. “Our support for the campaign, and the decision to become members of TeamPride, is further recognition that the LGBT community is a vital and integral part of our community.”’

There were a number of ways in which the clubs displayed their support. Rainbow flags were carried out at every match, the team captains wore rainbow armbands, the referees wore rainbow laces, and clubs posted images referring to the campaign on their social media channels. Manchester City, Arsenal and Manchester United were among the clubs who put up a rainbow version of the club crest as their profile picture on Facebook.

The influence of made-up stories on the recent US election led to much discussion about filter bubbles and echo chambers on social media. We tend to click on and like the sort of things we agree with, a tendency which is amplified by “more of what you like” algorithms, until the world we see through social media has been so shaped by our personal values and prejudices that we seldom ever see anything we disagree with.

The reaction to the Rainbow Laces campaign shows that nothing blasts through people’s filter bubbles quite like a Premier League football club. These are institutions which are followed by millions of people from every social and political background around the world.

No sooner had the clubs posted their rainbow images than their social media channels were swamped with angry denunciations from fans around the world who were outraged to see their club promoting gay rights.

A wide spectrum of homophobic opinion was present, from those who believe homosexuality is an abomination in the eyes of God, to those who consider it a crime comparable to paedophilia, to those who think it is a disease that should be treated by doctors.

There was also the distinctive self-pitying whine of what we might call the “embattled majority” – those who believe that, as the Trumpsters and Brexiteers say, “people are tired of political correctness”. As Lewis Storer put it on the Manchester United Facebook page, “The more these things get talked about the more it encourages people to talk utterly hateful crap. Probably because its everywhere and always talked about. Anyones sexual choice is rammed down our throats.”

Quite how the campaign was ramming anything down anybody’s throat was not explained, though anyone reading the threads could not help but be impressed by how often this metaphor is used by homophobes.

But because it was plain that a large proportion of the negative comments were coming from the Muslim world, there was also a counter-wave of comments from people attacking Muslims for being bigoted and backward. As someone with a Union Jack avatar wrote in response to Liverpool’s rainbow tweet: “It’s the liberals that want Muslim scum coming into their countries, and the Muslims are fundamental extreme conservatives.”

Fifa frequently boast of football’s power to “bring people together”. These comment threads were certainly bringing people together people from widely divergent backgrounds, but all they wanted to do was hurl abuse at each other. It felt like a preview of forthcoming thermonuclear attractions.

Daniel Tanaja Simatupang reflected a common theme on Arsenal’s Facebook with the comment: “There i hate Arsenal since this piccture. No doubtly. Arsenal should be focus on SPORT not for politics, religion, social... i hope arsenal will be relegated! blunder picture! destroyed all the fan”.

Daniel’s idea that football clubs should stick to football and not get involved in politics is shared by Fifa, who ban teams from engaging in political messaging.

Unquestionably, the Premier League succeeded in getting an anti-homophobia message out to a lot of people who aren’t used to hearing it. Still, some will dismiss it as tokenism and PR “pinkwashing”. What can it mean for Manchester City to post a rainbow flag on Facebook when the Emirati royals who own the club preside over a criminal justice system that imprisons gay people?

The clubs could now take the opportunity to block all the fans who said anything homophobic or racist on the rainbow threads. These pages are read by tens of millions, including children, and if the clubs are serious when they say that homophobia and racism have no place in the game, they should not have any place on their social media channels either.

Of course, such a policy would entail the clubs alienating some of the “customers” they have worked so hard to attract. If the episode has told us anything, it’s that Richard Scudamore’s dream of football being “for everyone, everywhere” will not be as easy to achieve as he had hoped.