Ken Early: Allardyce remains stuck in his own blind spot 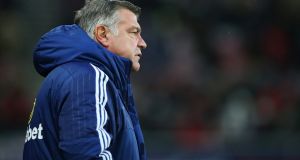 Sam Allardyce, manager of Sunderland: usually a good man for a pre-match chat, but not this weekend, apparently. Photograph: Ian MacNicol/Getty Images

It was another bad weekend for Remi Garde. The Aston Villa manager saw his side beaten 3-1 at Sunderland, then found himself being sniggered at for peevishly rejecting his opposite number Sam Allardyce’s magnanimous offer of a handshake at the end of the match.

Garde said that he had been riled by Allardyce’s failure to extend the usual pre-match civilities.

“I would have preferred that Mr Allardyce came to me before the game and say, ‘Hello’,” Garde said.

This was a bit surprising, because Sam Allardyce is usually a good man for a pre-match chat. That, at least, is what Allardyce says in the autobiography he published last autumn, shortly before he took over at Sunderland.

“The tradition of going into the opposing manager’s office for a glass or two is dying out,” Allardyce wrote. “The foreign bosses aren’t keen on it, and there are so many duties after the match that there isn’t the time. It is more likely we have a cup of tea together before the game, when it’s all nice and friendly and there is no winner or loser. The younger managers are paranoid about giving anything away though, so it’s only airy-fairy chit-chat unless you really know the other bloke.”

Sunderland have conceded a league-high 39 goals. The team that finishes one place above relegation concedes, on average, 59 goals per season; let in 60+ and you usually go down. Sunderland are on course to concede more than 75.

Fortunately, they couldn’t have a better man in their corner, at least according to that man. Allardyce’s book contains an index entry: “Allardyce, Sam: world’s best coaches, belief in place among 245”. Yet the game has never offered him the big job he believes he deserves.

Nobody can say for sure how his career prospects were affected by the allegations in a 2006 BBC Panorama investigation that Allardyce had been involved in transfer corruption.

Allardyce, who always denied the allegations, said at first that he was planning to sue the BBC, but in the end he never did. His book explains that the prohibitive cost of legal action meant that he could not afford to take the risk.

Football is not too squeamish about those sorts of allegations, and Allardyce has seldom been out of a job since the programme was aired. Arguably more damage has been done to his prospects of taking over a top club by the widespread notion that his teams play unfashionably old-school football.

This reputation annoys Allardyce almost as much as Panorama. He writes: “There’s a saying, ‘If you shag one sheep, you’ll always be known as the Sheep Shagger’ . . . Similarly, get labelled with being ‘long ball’ and it never leaves you.”

Allardyce believes that he acquired this reputation because certain other managers, including Graeme Souness, Arsene Wenger and Rafael Benitez, couldn’t take losing to his teams and hit back with the long-ball low-blow.

Allardyce has insisted that a long ball be referred to as a “long pass”, as though they weren’t the same thing. The truth is he believes in long-ball football, or, as he prefers to put it, “getting the ball in the box with quality”.

Not that any of this would matter if Allardyce weren’t so defensive about it: there’s no single right way to play football. If Allardyce does have a fault, maybe it’s that he is too quick to see faults in others that he fails to perceive in himself.

In the book he reveals he teased then-Wales manager Gary Speed about his mouthy fitness coach Raymond Verheijen, who, Allardyce thinks, “took all the credit when they were winning and mysteriously went missing when they’d lost”.

“You’ve got to get rid of that bloke, it’s always about him,” Allardyce told Speed.

Three pages later, he is recounting West Ham’s win in the Championship play-off final: “We would have lost but I made two of the best substitutions of my life . . .”

He scoffs at the idea that Rafael Benitez deserves credit for masterminding Liverpool’s comeback in the 2005 Champions League final. Allardyce says that match was all about Steven Gerrard, who “took the game by the scruff of the neck”.

Elsewhere, he talks about surprising Andre Villas-Boas with a 4-6-0 formation at White Hart Lane, attributing West Ham’s 3-0 win to his tactical masterplan. Yet all anyone who saw that game can remember is the stunning individual performance of Ravel Morrison.

The next time Allardyce is annoyed by football’s failure to give him the credit he deserves, he might reflect that credit is a two-way street.