Ireland women hoping to make it lucky 13 against US 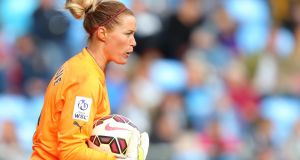 Setanta Sports Republic of Ireland international goalkeeper and captain Emma Byrne is on course to win her 122nd cap this evening in San Diego where the Irish women’s team will be looking to avoid defeat against the United States for the first time.

A weakened Irish side lost 3-0 to the Americans on their last visit back in May when the hosts were preparing for a World Cup that they ultimately won. That was the 12th time the two sides have met with the US coming out on top on every occasion.

This time, Sue Rohan has been able to bring a stronger squad with Chelsea’s Niamh Fahey the most notable absentee.

The game will be shown live on Setanta Sports (kick-off 10.30pm Irish time). The Irish will play the United States under-23 team in the second game of their two-match tour on Monday. The matches are intended to help with the preparations for the Euro 2017 qualifiers.