Ireland can put Austria out of the World Cup equation 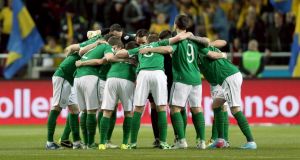 Team Ireland: can beat Austria at the Aviva

My first ever international as a supporter was a glorious 3-2 win over Austria in October, 1963. Well, at least that’s how I remember that magical occasion, not least because I viewed Ireland ’s third goal, a penalty by Noel Cantwell, from a position almost on the pitch along with hundreds of small boys. We’d wormed our way through the broken wire fence at the tramway end of Dalymount and escaped the almost suffocating crowd on the terraced steps behind the goal.

Sadly, tonight’s game will be played in the more sterile atmosphere of our new stadium, which intimidates nobody and has yet to become an advantageous home.

But Friday’s encouraging performance has given us real hope this team can get its act together in the remaining group games. Until then, Sweden appeared to be our main threat for a play-off place, but their performance against us was more akin to the one in the Faroes, when they scraped a 2-1 win, than their extraordinary draw in Berlin.

Meanwhile, Austria have crept in to the picture, having taken just a point from their first two games, after two very solid home wins and 10 goals. They have been quite successful at underage level over the last 10 years, with many talented players now emerging in the national team. But just like us, they need time to get the blend correct.

Overconfidence
I mention this because I sense an overconfidence about tonight’s game that concerns me. We’ve had a succession of awful performances both home and away in competitive games, only rescued by competence in the Faroes and Friday’s encouraging performance.

Will the the selection of Glenn Whelan ahead of Paul Green help? I’m not so sure because Green was more mobile and dynamic than Whelan in his two appearances this year. We were at our best in the second half against Poland when Green joined James McCarthy in midfield, in place of Whelan, Wes Hoolahan coming in to the fray after 60 minutes to ensure dominance and creativity.

Once again, our challenge will be to gain control of the midfield area, where we have frequently been outplayed in the Trapattoni era.

Many have been dismissive of Robbie Keane ’s contribution against Sweden, but for me, his performance was vital to the success of the game-plan. We were never outnumbered in midfield, for a change, and his persistent pressing of the nearest Swedish player in possession totally upset their rhythm. Of course he was less effective as a striker, but that was due mainly to his responsibility deeper on the pitch. His replacement tonight, Conor Sammon, will not play the same role, but it’s essential someone does.

With David Alaba, the excellent Bayern Munich left back who plays as a central midfield player for Austria, capable of directing operations from deep, Shane Long needs to put early pressure on him without McCarthy or Whelan leaving their positions and providing holes for exploitation. But he had this responsibility against Greece and wasn’t disciplined or consistent in his application.

Hoolahan is ideal for that role, he can link the play and create beautifully, but, as with Robbie Brady, Trapattoni doesn’t really trust him, yet.

While the Keane change is enforced, Sammon’s selection is a strange one. While I have admired his progress through the years, his all-round game against Poland did not convince me he’s ready, or a better option as a front man than the others available, including Kevin Doyle and Jonathan Walters.

High-tempo
But after two high tempo games so close together a couple of fresh players in the line-up is a good idea. It’s especially important that the midfield and attackers can play with the same intensity that we saw in Stockholm. Remember, Austria’s game on Friday against the Faroes was a doddle.

To some degree, there was a siege mentality for several of the players in that game. Marc Wilson, Séamus Coleman, Ciarán Clark, James McClean, Green, Long and McCarthy have all had reason to feel unloved or disrespected by the coach in recent times, but, at one stage or another, they’ve all produced the goods – so maybe Trap’s irrational attempts at psychology have worked. I’m more inclined to believe he’s fallen across the right team through the absence of his regulars, the disastrous form of others against Germany, and his attendance at the odd match, for a change.

The chance is there tonight to put Austria out of the equation. I would love to see the team go for it, with a mix of Trap’s caution and a natural Irish high intensity attacking game. We showed against Sweden we’re much more effective when the emphasis is on passing, rather than rushing the long ball to the big front man. Let’s hope we continue with that method.

Friday’s display suggests a new era and a less straitjacketed shape and style. I really hope that continues for the overall good of the game, the team and the fans because a huge part of the reason for a less than full stadium of late, and a largely voiceless support, has been the boring football presented by Trapattoni’s team.

Wouldn’t it be great if, 50 years from now, the kids attending their first game tonight would still be waxing lyrical about the magical occasion that was their debut international against Austria?