Trump’s travel ban could prevent US from hosting World Cup 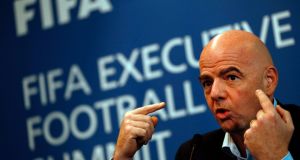 Fifa president Gianni Infantino: “Teams who qualify for a World Cup need to have access to the country, otherwise there is no World Cup.” Photograph: Dennis adrian/AFP/Getty

Donald Trump’s travel ban could prevent the US from hosting the World Cup in 2026, Fifa has warned.

Gianni Infantino, the president of world football’s governing body, said on Thursday that Trump’s revised executive order, which temporarily bars entry to the US for citizens from six majority-Muslim countries, could invalidate any bid from the US. The president’s policy, Infaninto suggested, is incompatible with tournament regulations.

Infantino told reporters in London: “Teams who qualify for a World Cup need to have access to the country, otherwise there is no World Cup. That is obvious,” said Infantino in London.

Bidding for the 2026 World Cup has not yet begun, but the US has emerged as a strong contender to host the tournament, either on its own or in concert with Canada and Mexico.

Infantino stopped short of explicitly criticising Trump’s order – which bars entry for 90 days from 16 March for those from Iran, Somalia, Sudan, Yemen, Syria and Libya – but reminded potential hosts of their obligations and insisted that the World Cup must be open to everyone.

“Mr Trump is the president of the United States of America, and as such, of course, I have huge respect for what he does. He’s in charge, together with his government, to take decisions that are best for his country. That’s why he has been elected,” said Infantino.

“We are now in the process of defining the bid requirements. In the world there are many countries who have bans, travel bans, visa requirements and so on and so forth. It’s obvious when it comes to Fifa competitions, any team, including the supporters and officials of that team, who qualify for a World Cup need to have access to the country, otherwise there is no World Cup.

The combination of large stadiums, excellent infrastructure, a willing public and a successful host tournament in 1994 makes the US an attractive proposition. The US could also benefit from Fifa’s desire to share the World Cup among continents: Europe and Asia are excluded from the bidding following the selection of Russia and Qatar in 2018 and 2022 respectively.

The 2026 tournament will be the first to feature 48 teams, after expansion from 32 was approved by Fifa in January. Following allegations of corruption in the 2018 and 2022 bidding process, the 2026 host will be chosen by Fifa’s 211 members rather than by its executive committee alone.

Sudan, Yemen, Syria, Somalia and Libya have never qualified for the World Cup, but Iran, which has a strong football pedigree, have reached the finals four times, most recently in Brazil in 2014. Iran’s only victory at the finals came, ironically, against USA in 1998.

Aleksander Ceferin, the newly elected head of Uefa, European football’s governing body, suggested in February that Trump’s order could damage any US bid.

“If players cannot come because of political decisions, or populist decisions, then the World Cup cannot be played there,” he told the New York Times. “It is the World Cup. They should be able to attend the event, whatever their nationality is. But let’s hope that it does not happen.”

Trump’s executive order could have implications for the Olympic Games, too. Following the withdrawal of Budapest last week, Los Angeles and Paris are the two cities competing to host the 2024 Games.

1 Born to ride, born to win: Sam Bennett, the making of a green machine
2 Next stop the Champs-Elysées in green for Sam Bennett
3 Saracens’ emphatic opening salvo enough to keep Leinster at bay
4 Ulster’s European dream clinically crushed by Toulouse
5 Keith Duggan: Surreal story of John Delaney needs to act as a wake-up call for FAI
Real news has value SUBSCRIBE
Crossword Get access to over 6,000 interactive crosswords