Neymar stands up to help Barca achieve the improbable 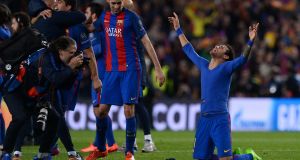 “As long as there’s a 1% chance, we’ll have 99% faith,” Neymar wrote in the aftermath of Barcelona’s 4-0 destruction in Paris – but by the time he stood over the ball the odds didn’t even look that good. They didn’t to everyone else, anyway. One per cent? If only. Their first comeback had failed, crushed by Edinson Cavani; the second had barely started and was surely beyond them now: Paris Saint-Germain’s away goal had left them needing three goals in 30 minutes and 27 of them had passed.

Even the goal, Barcelona’s fourth, should have been an afterthought. Neymar’s free-kick felt almost as cruel as it was perfect, curling into the top corner by the near post, a moment that would ultimately prove meaningless, a brief and empty hope inevitably taken away. The crazy thing was that somehow there was substance. When his right foot connected, the clock said 87.22 and everyone “knew” it was still impossible. But, as Neymar wrote afterwards: “Nothing is impossible for those who believe.”

It was easy to say then, of course, but he had said as much after Paris and now he had made it so. PSG crumbled. Terrified, they completed only four passes from the 85th minute on – and three of those were kick-offs. Barcelona completed an epic comeback that Luis Enrique said he could not explain in words. “No one will ever forget this. Football is for crazy people, unique,” he said.

There were explanations, although none were entirely adequate – not even when they were put together. Images of the impossible: Marc-André ter Stegen, who produced a decisive slide tackle 20 yards inside the PSG half to go with the saves. The back three, exposed but immense. PSG’s extraordinary loss of nerve. Sergi Roberto, who Luis Enrique joked couldn’t score in a goal the size of a rainbow. And, yes, the referee, Deniz Aytekin: Javier Mascherano later admitted fouling Ángel Di María, and there had been a handball, too, while Luis Suárez dived to win the penalty for Barcelona’s fifth. Then, the single most compelling explanation of all, there was the man wearing No11.

In seven minutes 17 seconds, Barcelona scored three times. Neymar was at the heart of them all. “This was the best game I’ve played,” he said. All night he had led, taking responsibility and taking hits, rolling with them. Much has been made of his lack of goals this season but that hides a huge contribution. Just as his tumbles and his skill – superfluous at times, the accusation goes – hide his competitiveness and bravery. The way that his runs relieve his team, giving them the chance to breathe, gets overlooked. The death of Raymond Kopa led to a description resurfacing that could usefully applied to Neymar, too: “A collective individualist.”

At times here he was in effect a wing-back, covering the left alone. Always available, hyperactive, he completed 60 passes and four times he ran past opponents he was determined would not run past him when the pitch tilted the other way. He scored two goals, was brought down for a penalty and created the winner. His eight assists in this Champions League are a record – and all from open play. “We played without fear, with happiness,” he said. That may not be true of them all, indeed this epic comeback felt a little un-Barcelona, but it was true of him. At the end, the calmness and confidence stood him apart.

It was not only about those final seven minutes but they may be among the best anyone has ever played. The most decisive, certainly. Three times Neymar stepped forward and each time the impossible became that little more possible until, incredibly, it actually happened.

He stepped forward … it would be tempting to add: “just when his team needed him”, except at first it didn’t feel like a moment of need. It didn’t feel like a moment at all, although it turned out to be exactly that. When the sixth went in, Leo Messi leapt into the fans. The photos of that moment, Messi holding his heart, screaming, may well become the image of this match but this time it wasn’t the Argentinian who had rescued them; it was the Brazilian, who only recently turned 25.

The same Brazilian, by the way, who after the game told everyone not to worry, that Messi would definitely stay. He was the bearer of good news, that’s for sure. The bearer of the cheeky response, too. After the first leg, Adrien Rabiot and Layvin Kurzawa had posted a picture on Instagram, Rabiot holding up four fingers, Kurzawa doing a two-fingered V for victory. Neymar reproduced it on Wednesday night, with the message: 4+2=6.

One radio station in Spain opened its coverage of the game saying the only way Barcelona could do this was if Messi was inspired but it was Neymar instead. It was not only that he curled in the free-kick and scored the penalty; it was that he even took them. And with that pressure, it was not “only” a penalty: he admitted that he had to compose himself but he had wanted it. Then in the last minute, when the ball came back to him, he did not simply sling the ball back in the box. He paused, cut inside and clipped a measured pass to Roberto to send the place wild.

Neymar had told Roberto to move. He would look for him: not Gerard Piqué, Samuel Umtiti or Suárez, but Roberto. He had told them all that there was a chance, even if it was only one per cent, but no one believed him. So he showed them.

1 Connell losing touch with the club championship is the real tragedy of Normal People
2 Ghosts and goalposts: The soul of street football in Dublin’s Gloucester Diamond
3 Rugby clubs in crisis: ‘I fear a lot of players won’t go back playing at all’
4 Ian O’Riordan: Dreaming of one-way cycling over the Military Road
5 Shane Ryan: Shark attacks and gruelling shifts on a Covid-free Atlantic mission
Real news has value SUBSCRIBE